IMF is not an option for Ireland 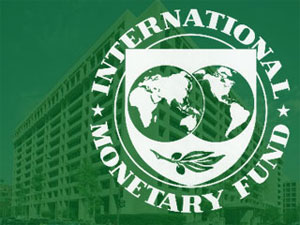 BE AFRAID, be very afraid, ‘IMF creep’ is threatening Irish sovereignty. It probably started as a joke at Dublin cocktail parties, where the well heeled talk about the latest David McWilliams articles and how they miss George Lee on RTÉ, but the glib argument that with a deepening economic crisis and a paralysed coalition government the only way to avoid disaster was to allow the International Monetary Fund (IMF) manage or run the Irish economy is gaining credence.
It can be comforting to think that there is a way to call time out and let someone else clean up the after effects of the economic tsunami that has beached the Irish economy but it is a delusional state.
It is the ideology of those who used to think that Thatcher wasn’t all that bad or that nuclear power is a viable option to protect the environment and tackle climate change. You know them, the people who ponder over the differences between Fianna Fáil and Fine Gael policies. When in government or not the differences between them are often cosmetic.
So before we press the emergency button do we really know who the IMF are, what they do, and most importantly if they are that great why did they not see the international economic meltdown that was emerging in this decade across the world’s economies?
What did they think, say and do about the global financial and banking collapse that has in Ireland wreaked the most havoc, with the highest levels of unemployment and the proportionally biggest bank bailouts of any other developed economy in the world?
Finally what is wrong in Ireland that we think so little of and value our economic sovereignty so lightly that some would consider throwing it away so easily. This question is perhaps the easiest to answer.
There are those who never appreciated the value of economic independence for Ireland, those who never wanted the responsibility of building a better Ireland, and would instead be quite content to let someone else do it. It is the ideology of Homer Simpson and scarily it is gaining credence In Ireland today.

Who are the IMF?
Ireland is actually part of the IMF along with 185 other states and the has a history of rebuilding shattered economies. It emerged in 1944 as a vehicle for the Allies post World War II reconstruction programme. There were 29 original members and alongside the IMF a new World Bank also came into being. Their original task was in 1944 according to the IMF one of “overseeing the international monetary system”
In reality the IMF and World Bank would set the game rules for financial markets and international trade, rules written by the most rich and powerful countries in the world.

What do the IMF do?
Through the World Bank and funding given to them by member states, they lend money to other states who are in financial difficulty. The money comes with an ever increasing amount of strings attached.
One good example of this was an IMF fund introduced in 1986 called a Structural Adjustment Facility, better known as Structural Adjustment Programmes.
The programmes work quite simply in that recipients get low cost loans where the repayments are easier to meet than international market rates but there a lot of conditions. These can be summarised under the demand to open their economies to more trade and ensure as little state involvement in domestic markets, which for poor underdeveloped states often means cutting back of health, education and social spending while privatising as much of the public sector in your economy as possible.
Many organisations including the Debt and Development Coalition in Ireland argue that the IMF has increased poverty in underdeveloped economies through the conditions of the funding it provides.
The IMF also produce a range of economic data and reports, and regularly comments forcefully on whether they agree or disagree with the economic policies of particular states. For example, in June the IMF said the 26-County economy was the most overheated of all “advanced economies”. If you don’t owe them money it is a moot point. If you do, you should read on?

The Ukraine Example
The Ukrainian Government have received almost $11 billion in loans from the IMF. In late October the head of the IMF described a new law to increase minimum wages and pensions by 20% in Ukraine as ‘a threat’ to the country’s economic stability.
The Wall Street Journal reported that, “The new Ukrainian law could derail the loan arrangement between Ukraine and the IMF and jeopardise arrangements the country has made to receive a loan from the European Commission”.
The IMF would only sanction a 10% increase in wages and pensions. This is the inflation rate there, arguing that anything above “would place an unsustainable burden on public finances.”

The Romanian Example
Reuters reported this week that the Romanian Government are to “force 1.3 million state employees to take 8 days unpaid holiday at the end of 2009 as part of efforts to meet International Monetary Fund spending targets”.
The news agency said that, “The move is part of deep austerity cuts that the European Union’s second poorest country is planning, including up to 150,000 public sector job cuts next year.”
So without the IMF we are talking public sector wage cuts in Ireland and with them who knows how like Romania Ireland would be?

The Sri Lankan Example
The Sri Lankan economy is facing into an election, and here in this flawed democracy it seems that the IMF are the de facto government. This week the IMF agreed to give the Sri Lankan government $329 million, part of a $2.6 billion loan. The IMF wants the government to ‘broaden the tax base” and “control spending”.
Anti-IMF campaigner Sarath Fernando, described by one news agency as “a veteran campaigner for the rights of peasant farmers and agriculture workers”, believes that, “The IMF wants government to reduce spending by raising taxes, privatising state-owned enterprises and cutting the welfare and social spending”.
Under the terms of the IMF agreement the Sri Lankan government must cuts its budget deficit from 7% to 5%. Without the IMF we have been able to consider a lot more options than the Sri Lankans.

Who else has the IMF ‘helped’ in 2009?
In the year to date Latvia, Hungary and Iceland have also received IMF bailouts. This week the IMF gave $1.7 billion to the Dominican Republic and Montenegro are negotiating a loan.

Who has threatened the idea of an IMF role in Ireland?
In August, former Fine Gael Garret FitzGerald, supporting NAMA said that failure to support the project could “let Ireland fall into the hands of the International Monetary Fund”.
In October Mary Harney said, “If the Government hasn’t the capacity to do what’s needed, then others will come in, like the IMF, and overnight they will make decisions. Then they will immediately start cutting expenditure by maybe 30 or 40 per cent, and that is a fact.”
The two were threatening the IMF to preserve a failing status quo, meanwhile the internet blogs, message boards and occasional economic commentary columns of Irish newspapers are floating the IMF option.
It is not a course of action anyone should want to take. The IMF is a road to ruin. shown by the living standards in most African states before the IMF came in with the money and the cuts/privatisation agenda and look at it after.
An Phoblacht
44 Parnell Sq.
Dublin 1
Ireland