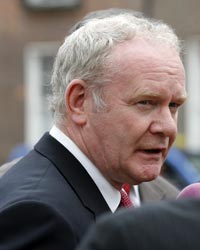 McGuinness: Sinn Féin is for resolving issues on the basis of equality and partnership

Sinn Féin Deputy First Minister and Mid-Ulster MP Martin McGuinness has said he is ‘disappointed’ with the DUP’s recently published proposals to fundamentally change the working of the Good Friday Agreement institutions, undermining the equality basis of the Agreement. McGuinness was writing in the Belfast Telegraph on 18 September and we reprint his article here.

Since his recent return from his summer break the First Minister Peter Robinson has gone on something of a solo run in terms of promoting an end to the checks and balances contained within the power-sharing framework in Stormont.
I will park the discourtesy of Peter’s approach to publishing his proposals. Last week he set out plans to simultaneously remove the community designation for MLAs and introduce a weighted majority of 65% for voting purposes in the Assembly.
As well as this he proposed that decision-making arrangements within the Executive should also be changed to require unanimity on all decisions. The latter proposal, which I note was missing from his Belfast Telegraph article, would of course have handed every party, no matter their size or mandate, a veto. And yet he put the argument forward that this would help streamline decision-making.
It would do no such thing. Let there be no doubt, this would represent a fundamental change to the cross-community voting arrangements which are foundation stones of both the Good Friday Agreement and the St. Andrew’s Agreements.
I have to say, at a time when many within our community are facing real hardship and looking to all political parties to pull together and deliver, it is disappointing that the DUP’s big idea is to try and reopen an issue concluded on eleven years ago in a negotiation they walked out of, and again settled at St Andrews three years ago when they finally came on board the political process.
The time when unionism could marginalise parties and dictate the type of republican or nationalist party they were willing to work with is over. It ended with the Good Friday Agreement and the DUP assented to this at St. Andrews. Regardless of unionist denial or wishful thinking, that is the political reality.

Choice for DUP
So let’s examine the motivation behind these proposals. It seems to me that the DUP have a choice to make, to move forward in partnership with and deliver for the common good or continuing to look over their shoulders at the Traditional Unionist Voice and the Ulster Unionist Party. We saw this before the summer months when Peter Robinson claimed the DUP would not move on transfer of Policing and Justice without the support of other unionist parties. This is an abdication of responsibility and hands a further veto to a UUP opposed to transfer at this time.
The fact is that when you take the position of a political leader then you have to lead. Sometimes you simply have to take on and confront your political rivals rather than try to move towards their position onto ground which you had previously abandoned to enter into power-sharing institutions in the first place.
These institutions are based upon the Good Friday and St. Andrews Agreements, as is our participation in them. They were subject to referenda North and South and when we all stood for election in 2007 we all knew the framework we were entering into. That means all of the checks and balances built in to ensure that the days of unionist majority rule never return. If unionism wants to exercise political power then it will only do it on the basis of equality and partnership with nationalists and republicans.

Deliver change
We owe it to all in our community to work together, to resolve issues and to deliver change. The reality is no thinking nationalist would accept that unionist politicians would respect their rights and aspirations in a voluntary coalition when they refuse to do so in a mandatory one. The DUP attitude to the equality agenda, to the Irish Language Act and the Bill of Rights are glaring examples of how far the DUP have to travel before we can be convinced about their commitment to mutual respect and partnership. Look at their track record in councils where time and again they reject power sharing.
Nelson McCausland tells us that the changes sought by the DUP will be determined by Westminster by either this or a future Conservative government.  I have no hesitation in predicting that any attempt by any British government to go down the road of abandoning the checks and balances contained within this framework would, in my view, result in the end of nationalist and republican participation in the institutions themselves. So rather than engage in the sort of fantasy politics of recent days, it would be far better if the DUP stopped making Jim Allister’s arguments for him and sit down and started to work the political arrangements they signed up to.

Equality and partnership
Sinn Féin is up for resolving issues on the basis of equality and partnership. This will require compromise and joint working, not on narrow party political lines but on the basis of what is best for all in our society. That is the key to making the process work effectively.
The argument has been put up that because of the nature of the current arrangements they are deadlocked and unable to deliver. I disagree. The reality is that the institutions can deliver and in many instances have delivered. But they only deliver on when they are operated as they were intended - on the basis of partnership, inclusion, compromise and acceptance of all as equals. Not on the basis of a requirement by any one party that it gets its own way all of the time, nor on the basis that the rules are changed when it doesn’t.
This means that the Assembly cannot deliver solely on the agenda of any one party. That’s what power sharing means. That’s what the DUP must come to understand.