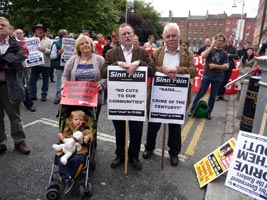 Speaking at a rally against NAMA and Fianna Fáil/Green cutbacks in Dublin on Saturday Sinn Féin Vice President Mary Lou McDonald said the Government must fall. She said any Government which prioritises greedy bankers over the welfare of children can no longer have the support of the Irish people and should be ashamed.
McDonald told the demonstration which went from Parnell Square to Anglo-Irish Bank, via Leinster House:
“This Government plans on spending €54 billion to bail out its friends in the banking sector. That is a colossal debt to place on the shoulders of Irish citizens.
“At a time when unemployment is out of control, hospital services are being cut back and thousands of children are being taught in prefab accommodation, this Government’s sole focus has been on how they can dig their developer and banker friends out of the mess which they have created, a mess which has directly affected all of us.
“So the Government has come to us, the taxpayers, to pay for this mess. It is all of us who worked hard to build the Irish economy that are being told we must pay for this mess. But of course we are already paying for the mess with our schools and hospitals and our public services.
“But that’s not enough for this Government. No, now they want to put their hands in the pockets of every man, woman and child in the state to the tune of €12,000. And what do we get for this money? We get nothing because the NAMA plan is flawed and cannot work. So I say no! This cannot be allowed to happen.
“This Government has lost the run of itself. It is out of touch with the reality facing the vast majority of people in this state. It cannot be allowed to continue making decisions that are detrimental to our society. This Government must fall and it must fall soon.”

Child Benefit
Referring to Government plans to target Child Benefit for cuts McDonald said it was “an absolute outrage” that the Fianna Fáil/Green Government is about to target Child Benefit for cuts again:
“Many thousands of families are dependent on Child Benefit for such basic necessities as children’s food and clothing. But even these are not out of bounds for this Government. And now our children are also being targeted under the McCarthy Report with more education cuts and medical card cuts.
“Any Government which prioritises greedy bankers over the welfare of children can no longer have the support of the Irish people and should be ashamed of themselves. So let’s be clear, this Government needs to fall and it needs to fall soon.”