Community sector to march against 'Bord Snip' cuts next week 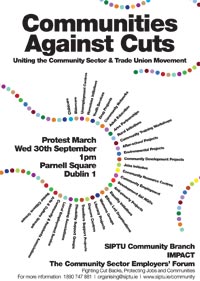 COMMUNITY groups across the 26 Counties reliant on jobs initiative schemes to deliver grassroots neighbourhood support services such as senior citizens help and meals on wheels, homework clubs, youth clubs support and family and advice centres are getting ready for a major march in Dublin next Wednesday against the McCarthy (‘Bord Snip’) Report which proposes axing state-backed employment initiatives.
Under the banner ‘Communities Against Cuts – Uniting the Community Sector and Trade Union Movement’, the protesters will be bringing pots, pans and whistles to Parnell Square at 1pm next Wednesday, 30 September, from feeder marches across the capital and taking their message to Oireachtas members in Leinster House.
This week, SIPTU’s Jimmy Kelly told a rally of community workers and families in Nenagh, County Tipperary:
“The McCarthy report is a very clinical document and cuts through the entire community sector with broad thrusts and leaves very little in its wake. It has called for drastic cuts including the devastating restructuring of the Community Development Programmes (CDPs) which provide unequivocal expertise in areas of adult education, local enterprise initiatives and information and support to local community groups.”
The report also calls for cuts to the Community Employment Schemes (CE) and the Community Service Programmes (CSP), both of which carry out crucial community works, varying from Meals on Wheels to community care and childcare.
“Many schemes fear they will face closure as people may not be in a position to take up places on the schemes due to the proposed welfare entitlement cuts and the €10 million cut from the CSPs.”
In the Dáil on Tuesday Sinn Féin Dáil leader Caoimhghín Ó Caoláin TD challenged Minister of State Pat Carey on the threatened cuts to CDPs. Carey was replying to Dáil Questions on the Government’s ‘active citizenship’ initiative when Ó Caoláin pointed out that the latest report from the Task Force on Active Citizenship praises the role of the CDPs. “Will you give a commitment that the cuts to the CDPs will not go ahead?” asked Ó Caoláin, but Carey declined to do so.
Meanwhile, Sinn Féin Councillor Seán Crowe has won backing by South Dublin County Council for a motion calling on the County Manager to report back on the effect of the McCarthy Report cuts on community services and families if they were to go ahead.