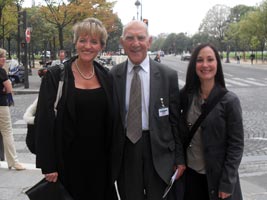 PARIS: Sinn Féin’s Martina Anderson MLA and Head of Policy Shannonbrooke Murphy with Stephane Hessel, former assistant to Rene Cassin in the drafting of the Universal Declaration of Human Rights

Britain cannot be allowed to escape in the fog of war

Britain’s role in causing and sustaining the conflict here cannot be omitted from any genuine truth and reconciliation process, Sinn Féin MLA Martina Anderson has told a gathering of international legal experts in Paris.
The Foyle MLA was at the Assemblé Nationale last weekend to address an audience of progressive lawyers on developments towards a post-conflict truth process, and the potential role international humanitarian law could play in ending impunity for crimes by agents of the British state including extrajudicial execution and torture of republican suspects.
Anderson spoke on the panel ‘Movements of Resistance Faced with Actions of Powerful States’, where she was joined by representatives of other national liberation movements, including Dr. Hocine Ait Ahmed, former Minister in the Provisional Government of the Republic of Algeria and Illan Halevi, Former Fatah Member of the Palestinian Authority.
“Whether international humanitarian law will be a factor at all in our truth process remains to be seen,” she said.
“Certainly, there is an argument to be made that the conflict in the North of Ireland was an ‘international armed conflict’ in the meaning of the Geneva Conventions, because it was a consequence not only of the original foreign invasion and subsequent colonisation over centuries of one nation by another, but also a result of the retention of control over the northern portion of our country since 1922 and the renewed military occupation of the northern portion of our country by this foreign power from 1969 to the present day. Equally certain, however, is that the British would make the opposite claim....

Truth process
Martina Anderson said it was “still very early days” in the public discussion, and the role that international humanitarian law could play in truth determinations or related criminal prosecutions has yet to be reached – or even considered by many. She said:
“For our part, Sinn Féin is of the view that whether and to what extent the parties to the conflict violated international humanitarian law and international human rights law during the course of the war is something that a truth process led by an Independent International Panel of expert judges should investigate and determine in accordance with international law.
“To be legitimate, any truth process must be fully independent, treat victims on all sides equally, involve the full co-operation of all parties, and expose violations by all parties. Moreover, one of the purposes of any future truth process must be to examine the causes, nature and extent of the conflict. This is not optional. A key objective of such a process should be healing – both for direct victims and for society in general. The process should thereby contribute to peace-building, and reconciliation should be its ultimate aim. So we need this process to deliver the truth to bereaved families as a result of independent investigation. It must embrace all the victims, and all the protagonists, whether they live in Ireland or England or elsewhere. And it must analyse the policies and practices that sustained and fuelled the conflict, to ensure these are never repeated. These are the benchmarks against which we will judge the legitimacy of any truth process.”
However, the Sinn Féin Equality and Human Rights spokesperson warned that the prevalent British institutional culture has been one of “actively suppressing the truth about their involvement in the conflict”.
She said that the Eames-Bradley proposals are also fundamentally flawed: “We are seeking the establishment of an Independent International Truth Commission and UN involvement in this process.
“Furthermore, we believe that decisions on whether to prosecute should be made by an independent prosecuting authority in the interests of the integrity of the process.
“For its part, the (Eames-Bradley) Consultative Group on the Past has refused to recommend an independent international truth commission, on the basis that the British Government and unionists would never agree to it. Instead, they recommend a highly problematic ‘Legacy Commission’ that would not be independent from the British Government.

Imperialism
“Their proposed Legacy Commission would have a very narrow remit to deal only with deaths attributed to the conflict, and would not have any scope to investigate causes of the conflict such as imperialism, colonialism, partition, and human rights abuses including internment without charge or trial, maltreatment of detainees, miscarriages of justice, political and cultural repression, and systematic discrimination. Decisions on whether to prosecute or not after the investigation of cases would be left to the Public Prosecution Service – but the track record of the Public Prosecution Service during the conflict makes it unlikely that British forces would face charges. In addition, far too much of the Legacy Commission’s work would take place behind closed doors. It would have the power to decide what information should be released into the public domain, and in so doing would be obliged to protect the interests of national security. This requirement could conceivably compel the Legacy Commission to withhold from public view information that would expose the real nature of the British state’s role in the conflict.
“The Consultative Group on the Past appears to have ignored the experience of international models that examine a fuller spectrum of human rights violations and take account of criminal justice agencies’ involvement in patterns of abuse arising from the conflict. Their proposals do not draw on UN principles and the experience and jurisprudence of the UN International Criminal Tribunals. Nor do they acknowledge and reflect the British state’s obligations under the various international human rights treaties to which they are party, including the International Covenant on Civil and Political Rights and the European Convention on Human Rights – much less their obligations under international humanitarian law.
“The 30 truth commissions that have operated around the world in the past three decades have given rise to best practice guidelines. It is [Sinn Féin’s] position that any future Truth Commission must comply with the Office of the United Nations High Commissioner for Human Rights (OHCHR) guidance on the establishment of truth commissions.
“Sinn Féin fully supports the establishment of a truth process that complies with recognised international standards. Indeed, we have campaigned and negotiated for this, and will continue to do so.”