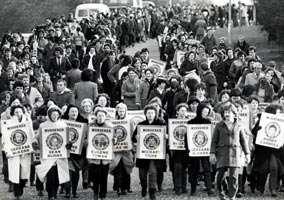 A Belfast coroner has ordered the PSNI to hand over secret reports into the RUC killings of six people in North Armagh during 1982. The call made by Coroner John Leckey is being seen as the first serious challenge for the new PSNI Chief Constable, Matt Baggot, who took over from Hugh Orde this week. Orde, in line with his predecessors, refused to make the Stalker/Sampson findings public. Baggott’s first weeks in office will be dogged by the shoot-to-kill issue as the coroner ruled that the PSNI must hand over the Stalker/Sampson reports by November.
Relatives For Justice, which campaigns for the families of people killed by the state was at the Coroner’s Court last week to support the families of the dead. Here they outline the background to the shootings and the measures taken by the British to cover them up.

In 1982 a specially trained RUC unit, known as E4a, was behind the shoot-to-kill operations in which IRA Volunteers Gervaise McKerr, Eugene Toman and Seán Burns were killed near Lurgan.
INLA men Seamus Grew and Roddy Carroll were also gunned down in Armagh City while 17 year old Michael Tighe was shot dead in an outhouse near Oxford Island on the outskirts of Lurgan. His friend Martin McAuley was seriously wounded in the operation.
The planned ambushes were carried out in November and December 1982.
At the hearings held in the Belfast Coroners Court on Wednesday 16 September Coroner John Leckey ordered the PSNI to make the RUC reports on the shootings available to allow the delayed inquests to be heard.
A preliminary inquest hearing into the killing of 76 year-old Roseanne Mallon, shot dead by the UVF in an attack on her home near Dungannon, County Tyrone in May 1994 was also before the coroner.
The 1982 killings of Volunteers McKerr, Burns and Toman as well as those of INLA members Grew and Carroll and civilian Michael Tighe, who were all unarmed when killed, were carried out by an RUC specialist unit trained by the SAS.
The E4a unit was under the direct command of the then RUC Chief Constable Sir John Hermon, his Deputy Chief Michael McAntamney and the then RUC Special Branch boss Trevor Forbes.
The incident involving the killing of Michael Tighe, and the wounding of Martin McAuley, was secretly recorded by bugging devices planted near a hayshed where the shooting took place. MI5, at the request of RUC Special Branch, planted the bugging devices. The hayshed had been used by republicans and was under surveillance.
The killings led to an international outcry and allegations that the British state was operating a shoot-to-kill policy. Reacting to domestic and international pressure the British government appointed John Stalker, Deputy Chief Constable of Greater Manchester, to investigate the allegations.
Stalker attempted to conduct an effective and thorough examination of the killings but was obstructed and prevented from doing so from the outset by the RUC, including its then Chief Sir John Hermon. Stalker was removed from the investigation on the eve of him questioning Hermon under police caution.
Stalker’s replacement, Colin Sampson, completed the report which was never made public.
Before his removal Stalker recommended that a number of RUC officers, involved in the murders of Seamus Grew and Roddy Carroll, be prosecuted for the shootings and perverting the course of justice.
RUC man John Robinson, who was tried for the shootings was found not guilty, even though he and another RUC officer had fired 19 shots into the car.
He claimed they thought they had been shot at, but when it was found out that the two men were unarmed, the RUC later falsely claimed that the two men had crashed through a roadblock and the two police officers were fearful of being run down by the car.
The judge said he was not concerned with an RUC cover-up, only whether Robinson was guilty or not. Not surprisingly, he ruled that Robinson “honestly believed he was fired at and his life was in danger.”
In acquitting three other RUC men of killing Volunteers McKerr, Toman and Burns trial judge Gibson, condemned the DPP over his decision to charge Sergeant William Montgomery and Constables David Brannigan and Frederick Robinson with murder.
Gibson went on to commend the RUC men for their “courage and determination in bringing the three deceased men to justice – in this case to the final court of justice”.
In 1988 the then British Attorney General, Sir Patrick Mayhew MP, told the British Parliament that the findings of the Stalker/Sampson investigation would not be revealed on the grounds of “national security” and that no RUC members involved in the killings would be prosecuted.
As a result the matter was referred to an inquest which usually rubber stamped these matters.
Lawyer Pat Finucane challenged the ruling and sought to force the Coroner’s office to make available the Stalker/Sampson report as part of the inquest hearing.
Finucane was himself assassinated in February 1989.
Again RUC Chief Hermon refused to allow the report to be made public and it was only exhaustive legal battles driven by the families who took their case through the British House of Lords and eventually to Europe that paved the way for the Coroner to seek  the report and conclude the inquests.
Hugh Orde, the outgoing PSNI chief, also refused to hand over the report to the Coroner. However at last week’s sitting the Coroner gave the incoming PSNI Chief, Matt Baggott, six weeks in which to provide a copy of the report.
Meanwhile the inquest into Roseanne Mallon’s death has been adjourned for the 25th time. Roseanne Mallon was shot dead by the UVF in May 1994 as she watched television in her sister-in-law Bridget’s house.
The RUC and British Army continually harassed the family. Prior to the killing her nephew Martin Mallon was detained by RUC Special Branch at a roadside and held until UVF killer Billy Wright arrived. Wright chatted with the RUC then approached Martin and threatened to kill his wife.
The attack that claimed Roseanne’s life, and injured Bridget Mallon, occurred within three weeks.
Subsequent to the killing a covert British Army unit was discovered on land belonging to the Mallon’s observing their home.
The Mallon family took a civil case against the British MoD for trespass and collusion and found out that British soldiers spying on the Mallon home were ordered not to intervene when they reported suspicious activity on the night of the attack.
On hearing gunfire they were again told not to react. These soldiers also stated that they were ordered to switch off cameras that had been transmitting televised footage of their surveillance operation on the Mallon home back to Mahon Road Barracks in Portadown.
The Mallon family is now seeking the full discovery of crown forces files and documents relating to the case.