The 'Non' Vote - foundation for a better Europe 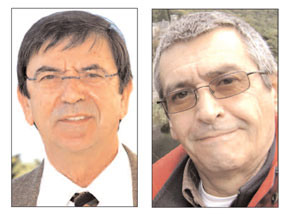 Beyond Irish shores there is distinct unease about the Lisbon Treaty. Here we get the perspectives of two French citizens on Lisbon as Communist Deputy of the French National Assembly, Michel Vaxes and Jean-Marc Fourneyron, also of the Communist Party, tell Ella O’Dwyer, why, given the chance to vote on the matter, they would deliver a resounding ‘Non’.
“The decision of the Irish people in June 2008” Michel Vaxes says “was courageous and resounding. In voting against the Lisbon Treaty, the people of Ireland consciously rejected the agenda of forcing wages downwards through competition, imposing pressure to cut back on public spending and public sector pay, undermining public services, and the militarisation of the European Union.”
Party colleague Jean-Marc Fourneyron says: “The Irish people bravely and decisively rejected a Europe of finance and bankers and asked for a different Europe, working for the people and not to their detriment.”
The two Frenchmen are clear about their expectations from Europe. “A new treaty should take on”, Michel and Jean Marc say  “the challenges of global capitalism and lay the foundations for:

In France, the majority of people rejected the EU Constitutional Treaty in a referendum held in 2005.  “At the time of the referendum French people demanded a new Europe based on social, democratic and progressive principles. A Europe of the people and the workers – not a Europe of bankers and traders”, Jean Marc says.
“Despite a resounding No result, the French government, out of fear of returning to the ballot boxes, decided to ratify the Lisbon Treaty through parliament. This shameful and dishonest act is a black spot on the history of our country. But the story is not finished in France nor in Europe. Together, we can change the course of history and create a Europe based on solidarity, democracy and social values.”
Vaxes and Fourneyron urge the Irish to stand our ground on the decision we made first time round: “Tell your government that you do not accept handing Europe over to the speculators and other forces responsible for the crisis and misery.”
So it appears the French would say ‘Non’ given the chance to participate in a referendum. But only we in Ireland have the power to say anything on the matter. “At the next referendum, the Irish people will carry the hopes of millions of democrats”, Michel and Jean Marc conclude, “the hopes of republicans and progressive Europeans who are relying on them to carry the fight.  We know that the Irish people will not betray what has always been, in the past and today, the values that it shares with the people of France: liberty, equality and fraternity. A No vote by the Irish people carries the promise of a new future for Europe.”