Lisbon - still all to play for with a week to go 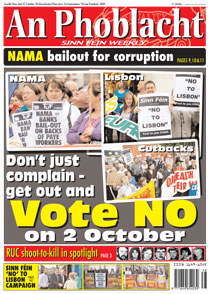 With opinion polls showing similar results to pre-polling day surveys in the last Lisbon referendum when the ‘No’ side was victorious, it is still all to play for with a week to go in the campaign on the Treaty which will determine the future of the EU.
As polling day approaches the supporters of the Treaty have been getting ever more desperate in their efforts to scare the people into voting Yes, focusing not on the alleged merits of the Treaty itself but threatening dire economic consequences if we vote No. This was epitomised by Pat Cox’s unveiling of a signpost offering the choice of ‘Ruin’ or ‘Recovery’.
For its part Sinn Féin has focused on the actual content and real implications of the Lisbon Treaty. Sinn Féin President Gerry Adams, Vice President Mary Lou McDonald and Dáil spokesperson on European Affairs Aengus Ó Snodaigh launched the party’s Alternative Guide to the Lisbon Treaty on Friday. Speaking at the launch Gerry Adams said:
“On 2 October people are being asked to vote on exactly the same Treaty as they voted on last year with exactly the same implications for Ireland and the EU.
“Indeed the European Council in the conclusions to the June Summit made it very clear that the so-called legally binding guarantees do ‘not change either the content or the application of the Treaty of Lisbon.’
“Sinn Féin's Alternative Guide to Lisbon 2 outlines in detail the specific sections of the Lisbon Treaty which we believe will have a negative impact on issues such as Ireland’s influence in the EU; workers’ rights and public services; international trade and family farms; neutrality and EU militarisation.
“This is not about our membership of the EU. That is secure. It is about a better Ireland and a better Europe.”

European Affairs Committee
On Thursday Sinn Féin Dáil leader Caoimhghín Ó Caoláin was before the Oireachtas European Affairs Committee which discussed Lisbon with all the party leaders in turn. Ó Caoláin is the leader of the only anti-Lisbon party in the Oireachtas. He asked the meeting:
“If it wasn’t good enough for the electorate in 2008 why on earth should it be good enough for us now? Fianna Fáil and their supporters in Labour and Fine Gael are using the economic crisis to scare people into supporting the treaty. We are told that if we vote No we will lose investment, jobs, and support from our EU counterparts.
“The truth is very different. The cause of this recession is the failed economic policies of this government and their counterparts across Europe. Many of these failed right- wing politicians were responsible for negotiating the Treaty and many of their failed right- wing policies are contained in the Treaty.”

Ó Snodaigh hits back
Sinn Féin TD Aengus Ó Snodaigh has attacked the Labour Party for deliberately misleading workers after Eamonn Gilmore claimed Sinn Féin should use its position in government in the Northern Assembly to increase the minimum wage. Ó Snodaigh said the minimum wage in the Six Counties is set by London and cannot be increased by the Assembly government. He accused the Labour Party of going on the offensive with Sinn Féin in an attempt to cover up its own betrayal of workers. Deputy Ó Snodaigh said:
“Everybody knows the Labour Party gave up on workers years ago when it decided to pursue coalition power over workers’ rights. Its marriage to Fine Gael shows the extent it is willing to go in its quest for power, but it appears willing to undermine its own guiding principles – as can be seen by its policy stated twice this year to withdraw trade union membership tax reliefs from workers.
“In 2006 Sinn Féin highlighted the problems with the minimum wages North and South in our Workers’ Rights policy document, a comprehensive paper received well by trade unions on both sides of the border. Our position on the wage is that it should be set at 60% of the average industrial wage across the island.”

Government scare-mongering
Sinn Féin Dáil leader Caoimhghín Ó Caoláin has described as “dangerous and disingenuous” Government claims that a second No to Lisbon on 2 October would represent a “withdrawal from Europe” and would damage any prospect of “economic recovery.” The Cavan-Monaghan TD also asked “If the government have it so wrong on NAMA how can they be trusted on Lisbon?”
“Contrary to the Government claims on inward investment made during the last referendum campaign the IDA have confirmed that 2008 saw a 14% increase in foreign direct investment. Managing Director of Microsoft Ireland Paul Rellis told the Oireachtas sub-committee on the Future of Europe on 21 October 2008 that he had not, ‘seen any material impact on jobs, market access or sales in recent months attributable to the rejection of the Lisbon Treaty’ in 2008.”

Barroso butts in
A protest comprising members of Sinn Féin, PANA, Say NO To Lisbon campaign and the Socialist Party was held outside Limerick City Hall last Saturday to coincide with the visit of José Manuel Barroso, President of the European Commission. Sinn Féin Councillor Maurice Quinlivan personally expressed to Barroso his disappointment at the timing of his visit to Ireland as its represents a blatant interference by the EU Commission in the Lisbon Treaty Referendum campaign.
Quinlivan said: “While I welcomed Mr. Barroso to Limerick I expressed my disappointment at the timing of his visit. I also expressed the view that the EU Commission had not respected the views of the Irish people.”
Speaking in the aftermath of Barroso’s visit Sinn Féin Vice-President Mary Lou McDonald accused the Commission President of being “dishonest on the impact of a second No Vote on the economy.” McDonald said:
“At a meeting in Brussels earlier this month Sinn Féin MEP Bairbre de Brún asked Jose Manuel Barroso whether the Commission will treat Ireland differently to other EU member states if Irish people again reject the Lisbon Treaty on 2 October. In reply President Barroso said: ‘There will be no discrimination against Irish people if there is a No vote. You will not hear from me any threat to Ireland.’
“However, the Commission President’s message in Ireland at the weekend was very different.
“The Referendum Commission chairman Mr. Justice Frank Clarke has confirmed that the Lisbon Treaty ‘contains no provisions’ relating to investment or employment.”

Shannon Airport insult
Roger Cole of the Peace and Neutrality Alliance (PANA) slammed the decision of pro-Lisbon politicians to meet Barroso in Shannon Airport which has been used as a staging post for wars in Iraq and Afghanistan. He said it “gives a clear message to the people of Ireland that a Yes vote will mean an even deeper involvement in these wars at a time when the majority of the people in the US and many, if not most of the states of the EU, want the occupations to end and the troops from the EU/US/NATO alliance withdrawn.”