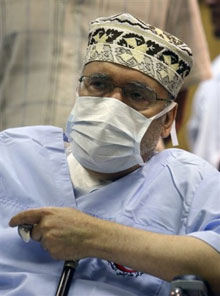 THE prolonged furore surrounding the Scottish Government’s decision to release the man convicted of the Lockerbie bombing, terminally ill Abdelbaset Ali Mohmed al Megrahi, has been fuelled by the British Tory press on a firm election footing.
Now the media hysteria over Megrahi’s release to his Libyan homeland is being directed into an anti-republican campaign that aims to undermine the work of victims’ groups in Ireland which have campaigned for an independent, international truth commission which would fully investigate the war in the North – and treat all its victims equally.
The British Labour Government has clumsily exposed its standard ‘profits first’ approach to international relations through documents and statements showing trade and oil deals with Libya influenced its position. But Megrahi – sentenced in 2001 to 27 years’ jail for allegedly bombing Pan Am Flight 103, which exploded over the Scottish town of Lockerbie on 21 December 1988, killing 270 people – has always maintained his innocence.
Serious flaws in Megrahi’s 2001 trial and first appeal have raised concerns that his prosecution and conviction were politically motivated and directed by the US and British governments, and the already weak circumstantial evidence he was convicted on has since been further discredited.
Following a three-year, £1.1 million inquiry, which resulted in a still-secret 600-page report, the Scottish Criminal Cases Review Commission (SCCRC) ruled on 28 June 2007 that Megrahi “may have suffered a miscarriage of justice”. The SCCRC, which made its decision based on “new evidence we have found and new evidence that was not before the trial court”, referred Megrahi’s case to Scotland’s appeal court.
The second appeal process began in May in Edinburgh. But in order to qualify for either prisoner transfer or compassionate release, Megrahi had to agree to end the appeal process, preventing the reopening of the case or the new evidence being revealed that would expose the stitch-up of Megrahi – and Libya – by the US and British governments.


MEDIA CYNICISM
It is an astounding indictment of the state of British journalism that six years’ worth of fairly unremarkable government talks with Libyan officials, during which London changed its position on the question of the inclusion of Megrahi in a comprehensive Prisoner Transfer Agreement between the two states, are the subject of a major scandal – while glaring questions about the Lockerbie bombing and the conviction of Megrahi remain almost entirely unprobed.
The media also largely ignored the voices of the families of the Lockerbie bombing victims, who expressed dismay that Megrahi’s appeal, which would have uncovered many unanswered questions about the bombing, has been dropped.
The most cynical moment in this whole media circus occurred when Megrahi returned to Libya, landing in Tripoli Airport on 20 August. US and British headlines voiced outrage at the “hero’s welcome” he received. British Foreign Secretary David Miliband said it was “deeply distressing” to see thousands of Libyans turn out to welcome a “mass murderer”; British Prime Minster Gordon Brown said the Tripoli scenes were “despicable”.
But at no point during the coverage of the Tripoli welcome by the vast majority of media outlets did reporters or politicians actually make reference to the fact that Megrahi maintains his innocence – which, of course, regardless of whether this is true or not, changes the entire context of the celebrations. The people of Libya were greeting him not as the man responsible for the Lockerbie bombing but as a freed political prisoner who they believed had been framed by the US and British governments as part of a process of framing Libya as a nation for the attack.


BEYOND REASONABLE DOUBT?
Libya agreed to pay US$2.7 billion in compensation to the families of Lockerbie victims in 2002 and formally acknowledged responsibility for the bombing in 2003 so as to have 11 years of crushing UN economic sanctions lifted. But the evidence Megrahi was convicted on in January 2001 was extremely weak, amounting to him having allegedly bought clothes of the same type as found in the suitcase containing the bomb that blew up Pan Am Flight 103, the allegation that he had worked for Libyan Intelligence and other circumstantial evidence.
Speaking to the BBC on 4 February 2001, Professor of Scottish Law at Edinburgh University Robert Black QC, who designed the trial format for Megrahi’s case, held in a ‘neutral’ third country (the Netherlands), said:
“This was a very, very weak circumstantial case. I am absolutely astounded, astonished. I was extremely reluctant to believe that any Scottish judge would convict anyone, even a Libyan, on the basis of such evidence.”
The prosecution’s case, and the judges’ verdict, was based on two key points: that it was Megrahi who bought the clothes which were packed into the suitcase that contained the bomb, and that the  suitcase began its journey in Malta rather than either Frankfurt or Heathrow airports.
But Megrahi was never positively identified as the man who purchased the clothing, there was no evidence produced to link Megrahi to the suitcase or the bomb, nor was there any evidence to prove that the suitcase began its journey in Malta, let alone that it was Megrahi who sent the case into the transport system.
He was convicted on the word of Maltese shopkeeper Tony Gauci, who claimed to have sold him the clothes, then gave conflicting descriptions of Megrahi in 19 different statements over several years and failed to positively identify him in the courtroom.
The judges defended their acceptance of Gauci’s ‘identification’ with this remarkable piece of imaginative reasoning:
“There are situations where a careful witness who will not commit himself beyond saying that there is a close resemblance can be regarded as more reliable and convincing in his identification than a witness who maintains that his identification is 100% certain.”
The SCCRC’s report contains interviews with 45 witnesses, which further discredits Gauci’s testimony. In the 2007 summary of its main findings, the SCCRC said there is no evidence that Megrahi was even in Malta at the time the clothes were purchased.
Austrian academic Professor Hans Koschler, assigned by the UN as one of five observers to the 2000-2001 trial, said at the time a “spectacular miscarriage of justice” had taken place as a result of “considerable political influence on the judges and verdict... from the United States and the United Kingdom”.
For more than a year, the US and British intelligence agencies were convinced, on what they reported was “hard evidence”, that the Lockerbie bombing was carried out by the Syrian-based Popular Front for the Liberation of Palestine – General Command, in collaboration with the Iranian Government, in retaliation for the July 1988 shooting down of an Iranian passenger aircraft over the Strait of Hormuz by the US navy, which killed 290 pilgrims returning from Mecca.
But in October 1990, the US began to claim it was the work of Libya – around about the same time it was building up its military presence in the Persian Gulf in preparation for its first war on Iraq, which was supported by Iran and Syria. Libya was the only Arab country to oppose the invasion and campaigned for a peaceful settlement.
In the wake of Megrahi’s release from prison, former CIA officer Robert Baer, who participated in the original investigation into the bombing, said:
“The endgame came down to damage limitation because the evidence amassed by [Megrahi’s] appeal is explosive and extremely damning to the system of justice.”
The real scandal in this case is that the 600 pages of new, suppressed evidence about the bombing will not be heard. Dr Jim Swire, whose daughter Flora was killed in the bombing, and who is a spokesperson for a significant section of victims’ families, welcomed Megrahi’s release from prison, where he said it would have been “an abominable cruelty to force this man to die”, but slammed the fact that Megrahi was forced to drop his appeal, and that the Lockerbie evidence will now remain secret.
An Phoblacht
44 Parnell Sq.
Dublin 1
Ireland