NAMA - Crime of the Century 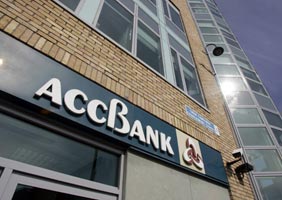 There is a generation of people in this state who recognise the feeling of being shafted by government, banks and developers. Those people remember what happened the ‘80s and ‘90s, when Charles Haughey told Irish people to tighten their belts as he pocketed bribes and swilled champagne on his yacht. Those people watched as communities were devastated so land could be rezoned for shopping developments.  They recall how AIB ripped off its own customers in the DIRT scandal and got away with a short-lived levy. That generation will look at NAMA and nod their heads knowingly. For my generation, however, this is our first experience of being well and truly screwed by a system that is designed to protect the establishment elite.
NAMA is the crime of the century and may well be the source of the next decade’s tribunals. I don’t write this to be sensationalist. The inconsistencies, the blatant falsities, the sheer brass-necked hypocrisy of the NAMA legislation scares the living daylights out of me. I can put it no simpler than this – each man, woman and child in this State is being robbed by this Government to pay for the balls-up of the banks and developers.

Paying over the odds
The problems with the draft NAMA legislation published by the Fianna Fáil/Green government are numerous. The focus point has been around the price NAMA will pay for toxic loans it transfers from the banks onto the taxpayers’ balance sheet, or what discount NAMA should get on the €90 billion worth of bad loans on the banks’ balance sheets. The legislation says NAMA will not pay current market value for these loans, which would mean a huge discount. Instead it will come up with estimates based on ‘long-term economic value’. The moves by ACC bank against the developer Liam Carroll have actually done the Irish taxpayer a huge favour. After being dragged to the courts, Carroll had to admit that if forced to repay his loans immediately, he would only be able to repay a quarter of their worth, based on the current market value of his portfolio.
The economist Karl Whelan, NAMA’s most outspoken critic, has pointed out that this long-term economic value benefits only the banks’ shareholders. For good measure, he’s thrown in reasons why the long-term viability of these loans is seriously in doubt, based on the fact that i) we have an oversupply of property to work through and ii) much of the ‘value’ of these loans was so over-inflated to begin with, it will never again be revisited. He adds: “NAMA is a conscious policy of transferring billions of euro through overpayment from the taxpayer to bank shareholders. These are the same bank shareholders who appointed and cheered on the boards of directors that contributed to bringing the economy to its knees.”
The Government has put forward NAMA as an alternative to nationalisation. Yet, almost all commentators agree that even after NAMA, nationalisation is coming. Even Colm McCarthy, author of the notorious so-called ‘Bord Snip Nua’ report, has now written that he sees nationalisation as inevitable. That is because, even after the loans are taken off the books of the banks, there is nothing to guarantee more loans becoming impaired as interest rates increase. So the State will go down the route of equity capital shares to provide liquidity that may be so large that banks are nationalised by proxy.
The second fundamental flaw of the NAMA plan has been pointed out by Notes from the Front economist Michael Taft. The Government has played the card that cleaning out the banks via NAMA will bring about a return to normal bank practice and lending. They claim we need NAMA for the economy to return to normal and anybody anti-NAMA is either economically naïve, anti-patriotic, or both. But this rests on the assumption that private banking practice is interested in restoring our economy and not just its own shareholders’ interests. Will banks lend if they manage to get their hands on cash via the NAMA-issued transfer bonds? In Taft’s words: “If they are to operate on commercial criteria (and what else could a private sector concern do without state subsidy) they will not lend to businesses they consider ‘risky’. Doing so might create another set of dubious assets that would impair the loan books. And that’s what NAMA is trying to rectify.”
In fact a code of conduct for lending to small and medium enterprises was published by the Financial Regulator last February and took effect in March – but SMEs say banks continue to deny credit.
It’s not certain what ‘normal’ is when it comes to banks’ lending practices, but it is certain that banks are not interested in public investment.

Hypocrisy
Then there’s that hypocrisy I mentioned. Sinn Féin Economy spokesperson Arthur Morgan TD stood alone when he asked where the NAMA for ordinary people was. When homes and small businesses were being repossessed the length and breadth of the state, he asked how the Government could stand over bailing out banks and developers alone. Six months later the Department of Finance’s ‘questions and answers’ guide to NAMA more or less answers his question. Question no. 2 reads: “How can you justify this further bail-out of the banks for assets and not prevent banks from increasing mortgage rates?”
The answer: “With regard to mortgage rates, the interest rates reflect commercial market realities as banks must pay more to access funds in wholesale retail markets. The Government has no role to play in the commercial day-to-day operation of banks here and believes that it is important that the banking sector has a market presence and operates within market discipline and constraints.”
Funny that, because surely if banks were operating in normal market conditions they would not be under a blanket state guarantee and in the middle of shifting all their bad loans off their books onto the taxpayers’ heads at a bargain price.

Sinn Féin standing alone?
Sinn Féin will, of course, be opposing NAMA. It is not an option. We are debating whether it is even worth attempting to amend it in the Dáil as it is such a fundamentally flawed proposition. Our policy of nationalising the banks and leaving a legacy bad bank to manage the bad loans in private interest, would deal with most of the problems within NAMA anyway and help bring about the tiny minority of positives (such as having a state-managed property company and owning potentially €30 billion worth of land in the Six Counties).
NAMA is not a foregone conclusion. Others, including some backbench Government TDs might be persuaded to oppose it. But it’s going to take an amazing amount of public pressure to put a nail in its coffin.