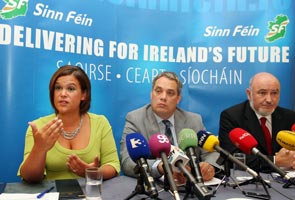 Sinn Féin Vice President Mary Lou McDonald launched the party’s No to Lisbon Campaign in Dublin on 13 August. Speaking at the campaign launch McDonald said the electorate is being asked to vote once again on the very same treaty that they rejected last year. She accused the Government of wasting the mandate that it was given to secure a better treaty. She said guarantees secured by the Government do not alter the text of the treaty in any way or change the impact it will have on Ireland.
McDonald told the well-attended press conference in Dublin:
“Almost 1,000,000 people, or 53% of the electorate rejected the Lisbon Treaty on 12 June 2008. People voted for a better deal for Ireland and Europe. The result presented the Irish government with a strong mandate to go to the European Council and negotiate a better Treaty for Ireland and Europe. The Government wasted that mandate.
“The Government and the Yes side are claiming that the so-called legally binding guarantees secured at the European Council meeting in June have addressed the concerns of the Irish people about this Treaty. These ‘guarantees’ are nothing more than a series of clarifications of some aspects of the Lisbon Treaty. They do not alter the text of the treaty in any way nor do they change the impact that the treaty will have on Ireland and the EU. Their legal status is irrelevant. On 2 October we will be voting on exactly the same treaty, with exactly the same consequences for Ireland and the EU, as we did last year.
“These consequences include the erosion of Irish Neutrality, the weakening of Ireland’s position in Europe, the loss of the Irish Commissioner, the erosion of workers’ rights and public services, the loss of an automatic right to a referendum on future treaty changes, continued participation in the European Atomic Energy Community, advancing the cause of tax harmonisation, the promotion of common foreign and defence policies and the militarisation of Europe and much, much more.
“After the last referendum Sinn Féin presented the government with a detailed series of proposals for a better deal for Ireland and the EU. Our proposals aimed to create a more democratic, equal, just and peaceful EU with protocols on Irish neutrality and tax sovereignty, a strengthened social clause, the retention of a permanent commissioner for all member states and the removal of the self amending clauses. The Government’s guarantees do not address any of these issues.
“The Lisbon Treaty was a bad deal for Ireland when it was presented to the people last year and it remains the very same bad deal. Sinn Féin will continue to fight for a better deal for Ireland and for Europe. In order to get a better deal we must reject this treaty once again. I am calling on the voters to do just that.”

Sinn Féin Dáil leader Caoimhghín Ó Caoláin TD told the press conference that the Lisbon Treaty is bad for both the Irish and the European Economy. Deputy Ó Caoláin said:
“The Lisbon Treaty is part of the failed economic consensus of the past. It was drafted by right-wing politicians who have led the European economy into recession. It contains many of the economic policies that have caused the recession and that continue to prevent member state governments from responding effectively to the recession. It is the Treaty of Bertie Ahern and Charlie McCreevy, of Silvio Berlusconi, Jose Manuel Barroso and Nicolas Sarkozy.
“Since 2004 the European Commission, under the stewardship of Portuguese conservative Jose Manuel Barosso, and ably supported by the European Court of Justice, has introduced proposal after proposal undermining sustainable economic growth, public services and workers’ rights.
“The Commission’s singular focus on economic competitiveness has weakened the ability of member states to strategically intervene in the economy to promote economic growth, protect jobs, enhance environmental sustainability and provide universal public services.
“Directive after directive has promoted the deregulation of markets in goods and services while other measures such as the rules on state aid and the Growth and Stability Pact have limited the scope for state intervention to strengthen the economy.
“The Lisbon Treaty increases the powers of the Commission to pursue its right-wing economic agenda despite the fact that such policies have been widely discredited by recent events.
“We fully expect the Yes side to use the recession as a scare tactic to bully the electorate into voting for this treaty. However, ratifying the Lisbon Treaty will make our present economic crisis worse. The Treaty is bad for both the Irish and the European economy.
“The Lisbon Treaty is now out of date. Europe needs a new treaty that promotes economic growth and social equality in equal measure. We need a treaty that provides member states with the maximum flexibility to protect jobs and stimulate economic recovery. We need a new treaty for new times.”