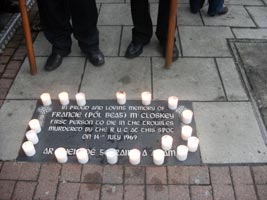 SINN FÉIN held a candlelight vigil to commemorate the 40th anniversary of the death of Francie ‘Pol Beag’ McCloskey. The first victim of ‘The Troubles’ died on 14 July 1969, a day after he was baton-charged by the RUC in Dungiven after a controversial Orange Order parade.
The mayor of Limavady, Cllr Cathal Ó hOisín, and author Aidan Hegarty addressed the gathering.
The death of McCloskey is recorded in Hegarty’s book, A Turbulent Year in Dungiven 1969. A plaque at the spot where Mr McCloskey fell was unveiled by Martin McGuinness MP five years ago.

APPEAL TO INVESTIGATE
Cllr Ó hOisín said:
“It is 40 years since Pol Beag died and it has yet to be investigated. The file was passed to the Historical Enquiries Team back in 2006. It would seem logical to me that the inquiry team should start at the first unsolved murder of ‘The Troubles’ and work forward chronologically. The older the incident the greater the likelihood that witnesses and indeed those responsible would pass on. I appeal to the Police Ombudsman to act without further delay.”
Several friends and neighbours of Mr McCloskey attended the service, including veteran republican Tommy Donaghy, who said:
“It was just like it happened yesterday, the shock was so vivid.
“The day we buried Pol Beag in Dungiven, Sammy Devenny died in Derry after being attacked by the RUC in his own home. And then, a couple of days later, the TV showed pictures of a man walking on the moon. That’s a week I will never forget as long as I live.”
An Phoblacht
44 Parnell Sq.
Dublin 1
Ireland