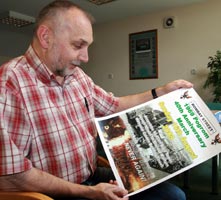 40th ANNIVERSARY: Seán Murray with a poster for the march and rally to commemorate the events of August 1969

MY abiding memory of the events in west Belfast on Thursday night, 14 August 1969, was of standing in the grounds of Clonard Monastery, watching in sheer disbelief nationalist homes in neighbouring Cupar Street, Norfolk Street, David Street and Conway Street burning. This was my introduction to naked sectarian hatred and the true nature of the Orange State.
Growing up in Clonard, we always sensed that we were trapped within a hostile statelet, whose flag was not our flag, whose police force treated us with suspicion and contempt, but nothing could prepare us for what was unfolding before our very eyes that evening.
Earlier that day, word had spread throughout the area that Clonard Monastery had been warned of an imminent attack. Local residents alongside men from the Clonard Confraternity, who worshiped in the church, resolved to defend it to the best of their ability.
Crowds gathered that evening around the monastery, armed with stones, bottles and hurling sticks. They later proceeded to put a row of bins across Clonard Gardens beside the monastery, presumably to provide some form of deterrent barrier to would-be attackers.
There was an air of innocence and naivete about the whole situation, besides a sense of standing together, irrespective of the odds, emboldened by what was happening in Derry.
That night, Trooper Hugh McCabe home on leave and 9-year-old Patrick Rooney were shot dead in Divis Flats as the area was raked by heavy machine-gun fire from the RUC’s Shorland armoured cars.
As the pogrom erupted along the Falls Road, Nationalist homes were burned to the ground in Percy Street and Dover Street, facing Divis Flats, and further on up the road around Cupar and Conway Streets.
Meanwhile, Clonard remained tense but unaffected. We erected a small barricade across the Kashmir Road, beside where I lived, at its juncture with Bombay Street. We were subsequently persuaded by Fr McLaughlin to take it down and return to our homes in the early hours of Friday morning. He assured us that the monastery bells would be rung if the area came under attack. The RUC had promised him earlier that the monastery and local homes would be protected in the event of any loyalist incursion.
Later that morning, the home of a local republican at 6 Kane Street, Proinsias Mac Airt, was raided and weapons taken away. Mac Airt, along with Lurgan republican Malachy McGurran were arrested. These weapons were to assist in the event of any attack of the area; now it was defenceless.

THE ATTACK BEGINS
Mackie’s, a large engineering works was located on the Springfield Road, where Springvale Training College is now situated. Despite its location in a nationalist area, it employed only a handful of nationalists, similar to employment patterns in other engineering firms like the shipyard, Shorts and Sirocco in east Belfast. Every working day, the mainly unionist workforce walked through Clonard to work and local residents feared the worst that morning in the aftermath of the burnings the night before. But their fears were unfounded as the unionist workforce proceeded rather sheepishly to work.
Later that morning, a nationalist worker by chance walked into a meeting in the toolroom. The room fell silent and he was questioned as to what he had overheard. When the Mackie’s afternoon shift finished that Friday, around 3 pm, the workforce again were strangely quiet and wasted no time making their way home via Clonard.
Shortly after they had reached the relative safety of the Shankill, the attack on Clonard began.
A large mob advanced from Cupar Street at its juncture with Kashmir Road, armed with sticks, stones and petrol bombs. As many of the local men were still at work, the initial defence of the area was left to a handful of teenagers and young men, who bravely held the mob at bay. Around this time, a local priest phoned the RUC at Springfield Road Barracks, requesting their assistance, but no help came.

SHOTS FIRED
Around an hour and a half later, the first shots rang out from the loyalist side.
It was at this time that 15-year-old Fiann Gerald McAuley was shot and subsequently died as he bravely fought to repel the incursion. His death alongside the events which led to it were to inspire a generation of young men and women never again to acquiesce to unionist misrule and the denial of human and national rights. He was anointed at the spot where he fell in Waterville Street by Fr Egan, who had been watching events unfold from the upstairs window in the adjoining monastery. He was to anoint four other residents within the next hour.
Fr McLaughlin decided, given the gravity of the situation, to go directly to Springfield Road RUC Barracks. He observed RUC men sitting around, drinking tea, but was informed that they were under orders not to leave their barracks, fearing an imminent IRA attack!
Fearing a massacre, Fr Egan attempted to contact the British Army’s GOC in Lisburn to request the presence of troops to deter the murderous onslaught that was now underway.
As residents desperately tried to defend their homes, without any assistance from the ‘forces of law and order’, in spite of earlier guarantees, fires began to take hold in many homes as the petrol bombs rained down relentlessly.
This was obviously not a spontaneous attack given the ferocity, confidence and size of the mob and the number of petrol bombs in continuous use. It was well-organised and well-resourced with deadly intent: a brutal, murderous plan to completely destroy the Clonard community.
The Falls was in the firing line the night before; it was Clonard’s turn today.

BRITISH SOLDIERS
The first batch of British soldiers arrived on the Falls Road at 7pm. Fr Egan attempted to persuade their commanding officer to move into the Clonard area but to no avail – he had his orders!
Around 9 pm, the first detachment of British troops moved into Clonard Gardens and began to charge the loyalist mob back towards Cupar Street. However, this proved to be totally ineffective as undeterred the loyalists systematically went from door to door along Bombay Street and petrol bombed our homes and our local primary school, St Gall’s.
In essence, they called the British Army’s bluff because they knew that they were under orders not to open fire. Bombay Street in its entirety and the bottom ends of Kashmir Road and Clonard Gardens were now a blazing inferno.
The firemen were fearful of driving into Bombay Street and local residents commandeered their vehicles but couldn’t operate them, relying instead on fire extinguishers from the local monastery.
A handful of men did arrive with limited weaponry during the evening but despite their courage and tenacity they were unable to prevent the Clonard Pogrom.

A GENERATION RADICALISED
As was the case in the 1920s, Clonard once again was on the receiving end of a loyalist backlash as revenge for nationalists having the audacity to challenge the Orange state.
But our generation would not be cowed or intimidated. Overnight, a generation of young nationalists was radicalised. It proved to be a massive watershed for me and my generation. Never again, unlike our parents’ generation, would we accept discrimination and second-class citizenship. The death knell was sounded for the Orange state.
When we looked around for a vehicle for change the only viable option, unlike today, was the ranks of militant republicanism, namely Fianna Éireann or Óglaigh na hÉireann. Many young men and women of my generation took that step. Out of the ashes of Bombay Street arose the Provisional IRA like the legendary phoenix of old, reborn and rejuvenated and, as they say, the rest is history.