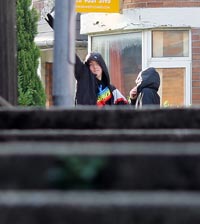 More than 100 Romanian immigrants have been forced to flee their homes in the Lisburn Road area of south Belfast following a week of violent attacks by far-right racist thugs. On Tuesday night 115 people, including a newborn baby and several young children, gathered their belongings and took refuge overnight in a church before being bussed to a leisure centre on Wednesday morning.
The Belfast City Council and Housing Executive were attempting to find new accommodation for the families, who have said they plan to try to save enough money to return to Romania.

New refugees
Over the weekend, a group of about 20 facists attacked the homes of two Romanian families in south Belfast.  Reportedly chanting slogans of the neo-Nazi group Combat 18 and the British National Party, the gang smashed windows and kicked in doors on Belgravia and Wellesley avenues, terrorising the occupants, who included children and pregnant women.
One of the families had moved to the property just days earlier following similar racist attacks at their previous home nearby.
As families began to leave their homes on Monday night, more than 150 people gathered from the local community in a demonstration against racism and in solidarity with the victims. The protest was attacked by a small group of people who made Nazi salutes and threw bottles at demonstrators.
Literature with excerpts from Hitler’s Mein Kampf has been pushed through the letterboxes of migrants’ homes and other homes in the area.
Following further racist attacks on Romanians in the Lisburn Road area since the weekend – which the PSNI failed to prevent despite the fact that the attacks were reportedly being carried out by the same gang in the same location at around the same time each night – several households packed up their belongings and moved to one “safe house” on Monday, seeking safety in larger numbers.
Having already suffered physical injuries, members of the Romanian community told the media they feared the next attack would be deadly. The PSNI said they had prevented a petrol-bomb attack.
But by Tuesday about 20 Romanian families – 115 people – were seeking shelter in this single five-bedroom house, prompting the local University Avenue Belfast City Church to step in and offer emergency refuge.
Belfast’s new refugees slept in sleeping bags and blankets after food and water was distributed by the Salvation Army and Red Cross.

Hate crime
The fact that these families have come under sustained racist attacks is appalling – but the fact that the PSNI have failed to protect their homes against a small band of organised fascist thugs is even more so.
Local residents stood guard outside Romanian families’ homes overnight after the weekend attacks because of a lack of confidence in the PSNI to effectively provide basic protection against violence.
Sinn Féin south Belfast DPP member Vincent Parker said that PSNI figures showed a “huge increase” in racist hate crime over the past three months in south Belfast while there was a clearance rate of only 9.9 per cent.
“This has dropped from 16.7 per cent this time last year, which was also too low,” he said.
“The PSNI must catch and prosecute those involved in racist hate crime and, with a clearance rate of 9.9 per cent, confidence in their ability to do so is very low.
“It’s not good enough and must be improved.”
The nearby staunchly loyalist Village area has also seen several migrant families from Africa, Asia and eastern Europe forced out by racist attacks in recent years.

Fighting racism
Just as Kevin McDaid’s murder by a loyalist lynch mob last month was explained as “football violence”, the media has repeatedly explained this crisis as arising from “increased racial tension” following violence at a World Cup qualifier between the Northern Ireland and Poland football teams in March.
The rise of racism, and the rise of the far-right across Europe in the recent European elections, is a result of the increased poverty, unemployment and insecurity brought about by the recession, combined with a failure of political leadership to identify the real causes of these problems.
The sudden and sharp rise in unemployment; the super-exploitation of workers from eastern Europe and the push by EU companies to use the free movement of capital and labour to try to drive down working conditions in the western European states are all factors which have contributed to this.
The problem is not the free movement of workers throughout EU states but rather the conscious pitting of workers from one member state against another in order to undermine wages and conditions – the ‘race to the bottom’.
The rise of racism needs to be resisted through public anti-racism mobilisations such as the one held by residents in solidarity with the Romanians who were made refugees. The police must also be forced to take racist hate crime seriously and develop an effective strategy to deal with it.
In the longer term we need to identify the causes of the unfolding economic crisis and pose real solutions to it, while challenging attempts to scapegoat migrants and divide the working people who are bearing the brunt of the recession.

McGuinness visit
On Wednesday morning, the North’s deputy First Minister, Sinn Féin’s Martin McGuinness, visited the Romanian families forced to flee their homes.
Speaking from the O-Zone Leisure Centre, where the families have fled to,  McGuinness said:
“People are shocked and completely disgusted by this incident, I came here this morning to show very clearly my commitment to facing up to any form of intimidation in our community, no matter where it may come from. I met with numerous families who are genuinely fearful for their lives and those of their families; I held a five day old baby girl in my arms today, she was born in Belfast and now forced to leave her home as a result of attacks by racist, criminal thugs. We need strong, clear and decisive leadership, standing together against the elements in our society who think that these actions are justifiable in any shape or form. For too long now other groups have been in the shadows espousing and justifying racist attacks. We need to see anyone with information on who is behind these attacks, and intimidation to bring it forward to the PSNI. There must be a full and thorough investigation into the litany of racist attacks both in South Belfast and elsewhere and we must bring those responsible before the courts.”