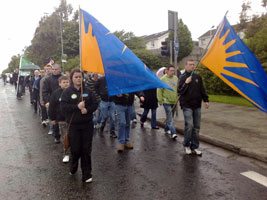 MARTIN ‘DOCO’ DOHERTY, the popular young Dublin IRA Volunteer shot dead as he foiled a UVF bomb attack on a function for republican prisoners at the Widow Scallan’s pub in Dublin’s Pearse Street on 21 May 1994, has been honoured by republicans at a number of events organised by Doco’s family and Sinn Féin.
On the actual anniversary of Doco’s death (Thursday 21 May), a plaque was unveiled by his family at the apartments block that now stands on the site of the since-demolished Widow Scallan’s pub. Local Sinn Féin Councillor Daithí Doolan unveiled the plaque, recalling the selfless heroism of the young republican who saved the lives of 300 people in the pub that night.
On Friday night, at a function where friends and comrades of Doco gathered to remember him, Nicky Kehoe, former Sinn Féin councillor and comrade of Doco’s, spoke about Doco’s life and his central role in the Dublin Brigade of Óglaigh na hÉireann. To a packed and hushed hall, Nicky said if it hadn’t been for his actions at the POWs’ fund-raiser, a significant number of leading republicans would have been lost to the struggle.

COMMEMORATION
The Martin Doherty commemoration took place in Doco’s Finglas neighbourhood on the Saturday, with special guests from Doco’s family and the republican flute band from Glasgow named in his memory.
Sinn Féin Cllr Dessie Ellis, another close friend and comrade of Doco’s, paid tribute to a republican not only dedicated to Ireland’s reunification but loved by the many friends he had.
Doco would have been proud to see his son follow in his footsteps as a republican activist: 17-year-old Mick Farrell Doherty is now Dublin organiser of the republican youth movement, Ógra Shinn Féin.
We could almost feel Doco smiling down on us.

FATHER’S IMAGE: Mick Farrell-Doherty receives a presentation in honour of his father from Nicky Kehoe