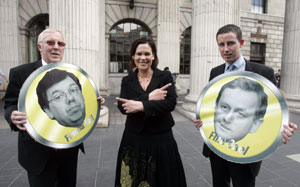 SINN FÉIN Dublin MEP Mary Lou McDonald has again called on the Left in Irish politics to come together in an ‘Alliance for Change’ as she launched a poster and leaflet outlining the similarities between Fianna Fáil and Fine Gael.
Speaking at the GPO in Dublin on Friday 22 May, she said people have to realise that if they want change they have to vote for change and that a vote for Fine Gael is a wasted vote in this election.
Mary Lou said:
“There is huge anger at Fianna Fáil and the Greens. People want change and they want real leadership. They want the job losses stopped and the banks dealt with. I understand their anger. They are perfectly right to be angry at what has been done to this country by the Government.
“Voting for Fine Gael is not an alternative for anyone looking for change. There is no difference in Fianna Fáil and Fine Gael policies. Both are right-wing, both have failed you. A vote for Fine Gael to punish this government is a wasted vote and one that will not fix the problems in our society.”

FF/FG TARGET VULNERABLE
Both Fianna Fáil and Fine Gael promised tax cuts in the last election, the Sinn Féin MEP pointed out.
“They both want to target the vulnerable to make savings now, through social housing cuts, cuts to rent allowance, reduced dole payments and children’s allowance cuts. They both want students to pay for college and they both want to see healthcare fully privatised.
“There is nothing to separate these two parties – they are two sides of the same coin.
“We on the Left of Irish politics need to align ourselves and stand up for people and offer them a real alternative. We cannot prop up either Fianna Fáil or Fine Gael, as Labour and the Greens have done in the past.
“This country needs a new direction. Other countries throughout the world are recognising that truth. Fine Gael will not give us the change we need and a vote for Fine Gael is a wasted vote in this election.”