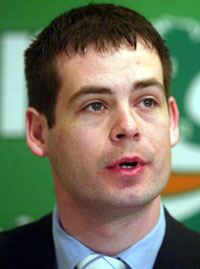 SPEAKING in the Seanad this week Sinn Féin Senator Pearse Doherty called for the immediate nationalisation of banks in need of Government aid as part of a short to medium term response to the banking crisis and said government proposals for a National AssetsManagement Agency (NAMA) is unworkable.
Doherty called for immediate nationalisation “of any banks needing government aid – without government or public liability falling on the tax payer for the imprudent lending and corporate failures of the management of these enterprises”.
He said Sinn Féin had argued for the creation of a state bank that would give credit to small and medium enterprises, protect family homes and restore confidence in the Irish economy. Such a state bank was urgently needed, he said.
The Donegal Senator said Sinn Féin supported immediately establishing one, single Private Legacy Bank as alternative to NAMA, whereby the toxic debts of the five institutions under the Guarantee Scheme would be administered and that all liabilities will remain with the developers and banking investors.
“The Government needs to urgently create transparency by supplying full details of the distressed assets and non-performing loans held by all banks seeking or in receipt of state aid.

SWEDISH MODEL
“The Swedish model of tough action, quick nationalisation, cleaning of toxic debts from insolvent banks and the creation of commercially viable short term state owned banks, along with an independent valuation board to determine the real value of distressed assets in the legacy banks is the most appropriate model for developing government policy right now”, he said.
Doherty detailed the legacy of banking corruption in Ireland. These  included the DIRT debacle, NIB interest loading on customer accounts, facilitation by all Irish banks of illegal offshore accounts so a wealthy elite could avoid tax, the 2006 AIB foreign currency overcharging scandal, the illegal Ansbacher accounts and the Anglo Irish share dealing scams
“On the very day that Brian Cowen was meeting Irish bank chiefs last September to put the final touches to a €440 billion bank guarantee, at least two of those executives were involved in deposit transfers involving billions of euro designed to actively deceive financial markets and the general public. We were being lied to in September and we have no guarantees we are not being lied to today”, he said, adding that Sinn Féin supports criminal prosecutions and civil actions against executives involved in the corporate malpractices and that such executives should be barred from posts in the financial sector or and directorships in any other business area.
An Phoblacht
44 Parnell Sq.
Dublin 1
Ireland