Arriving with Gaza's convoy of hope 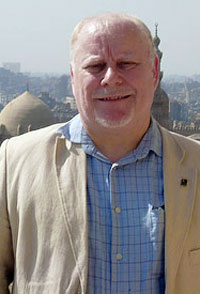 THE ‘Hope for Gaza’ convoy – organised by a range of small, Europe-based humanitarian organisations and other groups – travelled from Milan over the past month to bring aid to the citizens of Gaza who have been imprisoned by the Israeli military for several years.
Although the convoy has mostly medical supplies on board, the Israeli Government has put an embargo on all but what it considers to be 40 essential items. This has led to a hold up in delivering the aid to the Palestinian people.
Sinn Féin Derry City Councillor Gerry Mac Lochlainn flew to meet the convoy in Egypt last week and, having joined up with the convoy, had been waiting to enter the besieged area of Gaza.  Gerry got permission to enter Gaza early on Monday morning and this is his own stark assessment of the treatment of the convoy and the plight of the Palestinian people.

THE past 24 hours have been quite surreal as the delegates from the Hope for Gaza, who were finally permitted to enter Gaza, awoke to see Gaza City.
The ordeal all began when the convoy attempted to enter Rafah yesterday and was inexplicably stopped in its tracks and stranded by the Egyptian authorities. The checkpoint staff stamped our exit visas without problem but then revoked our permissions to enter Rafah, leaving us to spend the night on the floor of the checkpoint.
From our arrival at noon at the checkpoint on Sunday, the 24 hours that followed were full of waiting, anxious discussions, spreading of rumours and continuous speculation. The convoy organisers and elected representatives continuously spoke to various local officials in an attempt to discover the cause of the delay.
After the arduous work and sacrifice required to bring the life-saving cargo to this outpost, people anxiously waited with the hope that the authorities would allow them to bring the aid through. The negotiation of the medical aid convoy’s release included vital medical equipment such as a kidney dialysis machine, numerous wheelchairs, tens of thousands of pounds worth of medicines, and 25 ambulances.

BAD NEWS
At noon on Monday, the convoy organiser gathered the delegates to tell them the latest bad news. During negotiations, a proposal was made by the Egyptian authorities to allow only ten people through – specifically the elected politicians and some representatives of the convoy.  They suggested that after those approved politicians and representatives had entered Gaza and the other convoy members had departed then the aid would then be driven across the border by drivers from Gaza.
The proposal was found to be unacceptable to the delegates. They had seen stockpiles of aid taken to the Egyptian border and then left there for so long that it was no longer usable.  Rather than leave the aid to rot in some warehouse, the delegates preferred to bring the material and goods back home so that they might show the world what the siege of Gaza really means in practice. This was conveyed to the Egyptian authorities. Sticking to their position, the Egyptian authorities shocked and confused delegates by demanding that we had 20 minutes to accept their offer or we would be removed from the checkpoint. To reinforce this statement, scores of riot police were posted at the rear of the building.
The delegates had the concerns of people in wheelchairs as well as children to consider and they were anxious not to give any excuses to those who would refuse to let medical aid reach a desperate people in Gaza. The delegates decided to drive their vehicles back to port and sail the supplies home to Europe, turning the convoy into a touring monument to the inhumanity of the siege of Gaza. With that decision solidified, the media waiting on the Rafah side of the border for more than 24 hours began to contact delegates of the convoy by mobile phone. Pressure mounted as word began to spread of the medical supplies and aid waiting just 50 metres outside Gaza City.
Two Irish women leaving Gaza through the checkpoint, having heard that a Sinn Féin councillor was with the delegation, managed to get themselves to the door of the hall where we were camped. They told me of the thousands of desperate people lining the streets of Gaza in anticipation of the aid convoy’s arrival. They were proud that an Irish person was among those in the aid convoy. The women, having waited all day long in the baking heat, also spoke of the desperate need for basic medical equipment and medicines, expressing their hope we would get through the checkpoint.

SPINE-CHILLING
As we were speaking, a spine-chilling report of earlier that morning came through, telling of the sight of Israeli planes streaking over the Europa Hospital in Gaza, and the loud explosion which followed its passing. Thousands of leaflets dropped threatened Palestinians that Israel’s declaration that the area up to 300 metres inside Gaza from the border was now a security zone. This security zone included Rafah, where we were located... and stated that any Palestinian who entered there without permission would be shot.
The convoy’s organiser then approached the Egyptian authorities for a final try. To our surprise, they emerged with a new offer.  The authorities would now allow 20 delegates through and they would be able to witness the aid being delivered to Gaza City.
This was a difficult issue for the convoy’s delegates as it meant that the majority of them – many of whom had sacrificed much and worked tirelessly collecting for the purchase of this equipment – would not be able to see the aid delivered to those who needed it. Unselfishly, the delegates agreed to the Egyptian authorities’ restriction for the sake of allowing the aid to pass through.
This was followed by a very difficult period in which the leaders of each group tried to select who would be among those to enter. Eventually, a list was prepared, and whilst many people remained angry and upset at their exclusion, they accepted there were few other options if the aid was to be delivered.

AN IRISH WELCOME
Later that night, the Egyptian authorities acted on their offer, cancelling the stamp made the day before and reissuing visas allowing passage for myself and 21 others (we managed to add two children to the list at the last minute).
We were hustled to the border and climbed into some of the ambulances, passing through one last security check at the gate before crossing into the ‘no man’s land’ security zone.
After travelling about a kilometre, crossing into Gaza, people began clambering over the cars to give us flowers, adorn us with Palestinian flags or even just to wave or shake our hands.  When the waiting throng (which happened to include the Social Affairs Minister) got word I was from Ireland and a member of Sinn Féin, one man pushed forward to greet me. “Hello! I am a former prisoner. I spent 14 years in an Israeli jail.”
As we went, another man pushed forward, crying “Tiocfaidh Ar Lá!” in my ear.
We were suddenly among the Palestinian people, a people whom I had admired from afar for so many years. Imprisoned in their own country, they were living in the world’s biggest concentration camp and denied even the most basic medical aid.
Amongst these people, I felt at home.