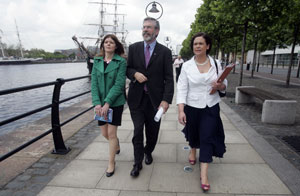 Speaking up for Ireland in Europe

THE Sinn Féin EU manifesto was launched in Dublin on Monday, with Mary Lou McDonald declaring that Sinn Féin’s priority is keeping Ireland at the heart of Europe and she outlined some of the achievements by herself and Bairbre de Brún.
Since the Sinn Féin MEPs were elected to the European Parliament in 2004, she said, there have been five key political priorities:–
1.     Protecting Ireland’s interests in the EU;
2.     Advancing the Peace Process;
3.     Irish language and the case for Irish unity;
4.     Promoting  workers’ rights, regional development and the needs of Ireland’s rural economy;
5.     Climate change, neutrality and global social justice.

“We have promoted these issues in our work in Europe and in Ireland,” Mary Lou said.
“We have secured widespread support in the European Parliament for key Sinn Féin initiatives around workers’ rights, homelessness and peace funding.
“We have worked extensively with a wide range of groups both in Ireland and Europe and have actively facilitated the engagement of trade unionists, farmers, community groups, collusion victims and others with EU institutions.
“We also led the way in publishing our own expenses, one of the few parties on this island to do so.  And we were the only party to stand up for Ireland’s interests in the EU and oppose the Lisbon Treaty.”
The work of the EU Parliament over the next five years will be very challenging and it is vital that Ireland is represented by people who are not afraid to stand up for what is right, the Dublin MEP said.  “There is no value in sending back the same yes men who are so out of touch that they were willing to support the erosion of Ireland’s power in the EU by the Lisbon Treaty.”

NEW APPROACH
In the lifetime of the next parliament, Ireland will become net contributors to the EU, the Dublin MEP said.
“We need to move away from the drive towards a European superstate to what the EU is meant to be about – the coming together of member states in equal partnership.
“Today, Sinn Féin are setting out our priorities for the EU.  We are seeking a mandate to stand up for Ireland’s interests, to continue our work on workers’ rights, the economy, Irish unity, climate change, neutrality and global social justice.”

WE NEED NEW TREATY
Gerry Adams said that Sinn Féin believes that the EU needs reform.
“We need a new treaty that brings greater democracy to the EU, returning power to people and member states.
“We need a treaty that sets out economic and social policies that prioritise prosperity with equality and sustainability.
“We need a treaty that protects neutrality and that sets its face against the creeping militarisation of the EU and foreign and defence policies decided by NATO.
“If such a treaty was brought forward we would support it.
“However, it is my opinion that the Irish Government have not secured fundamental changes to the Lisbon Treaty and it is their intention to put the Lisbon Treaty before the people for a second time and try and bully people into accepting it.”

•    Secured overwhelming backing for the de Brún report on the PEACE programme;
•    Worked with Irish-language groups to secure the status of official and working language of the European Union for Irish;
•    Initiated and secured overwhelming support for a Declaration calling for action by the EU and member states to end street homelessness by 2015;
•    Secured a visit to the North West of the influential Regional Development Committee to promote fair regional development;
•    Secured overwhelming support for the McDonald Report and subsequent resolution on the International Labour Organisation Maritime Labour Convention on workers’ rights in the maritime sector;
•    Campaigned for workers’ rights and secured recognition of the issue of corporate manslaughter in a report on Corporate Social Responsibility;
•    Actively promoted progressive solutions to climate change through Bairbre de Brún’s membership of the Temporary Committee on Climate Change and amended EU legislation to promote recycling;
•    Secured further support for farmers in meeting the requirements of the Nitrate Directive and pushed for reduced red tape;
•    Helped secure one million signatures across the EU calling for improved rights for people with disabilities;
•    Brought the case for a united Ireland to MEPs and other decision-makers from all over Europe;
•    Led the way by publishing our MEPs’ expenses.

•    Build support in the EU for Irish reunification;
•    Support negotiation of a new treaty for a new time and oppose any Lisbon Treaty re-run;
•    Promote a real agenda for greater EU democracy, including strengthening the role of regional and national parliaments, reducing the power of the unelected and unaccountable Commission, and reform of the MEP parliamentary allowance system to ensure that all expenses claimed are vouched and full details are published;
•    Be the strongest advocates of Irish economic sovereignty and all-Ireland tax harmonisation;
•    Oppose the liberalisation and privatisation of key public services and campaign to ensure that such services remain the exclusive responsibility of member states;
•    Fight against the relocation of businesses and jobs to lower-wage economies and ensure that companies cannot relocate to other jurisdictions within the EU on that basis;
•    Continue the campaign for a Social Progress Clause in any future EU treaty which would guarantee that pay and employment conditions cannot be undermined by rulings of the European Court of Justice;
•    Support reforms of the Common Agriculture Policy (CAP) that make Irish farming and the rural economy more sustainable and prosperous;
•    Support the highest level of environmental standards in EU legislation in Strasbourg and hold authorities at home to these standards;
•    Resist attempts to reduce targets for emissions cuts set by Brussels;
•    Oppose the drive to integrate foreign and defence policy among EU member states and to subordinate this policy to NATO, and campaign for the restoration of an independent Irish foreign policy;
•    Continue to use the European Parliament as a forum to voice opposition to the occupation of the Palestinian Territories by Israel and to call for the suspension of EU preferential trade with Israel until such time as that state fully complies with international law.