Kevin Lynch, the H-Block Hunger Strike and the seeds of change 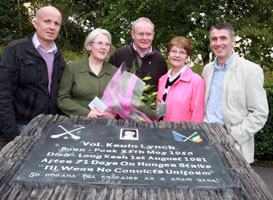 TWENTY-EIGHT years ago, on 1 August 1981, Kevin Lynch died on hunger strike in the H-Blocks, Long Kesh. Kevin had been on hunger strike for 71 days. He was just 25 years of age. Last Monday would have been Kevin’s 53rd birthday.
Joint First Minister Martin McGuinness was in Park, County Derry, on Sunday night to pay tribute to the young sportsman and heroic republican and the onus on us to fulfill the legacy that Kevin and his fellow Hunger Strikers left us.

In particular, the last two years have witnessed the DUP:–
•    Being brought into an inclusive power-sharing Executive – with Sinn Féin;
•    Being brought into the daily operations of the all-Ireland Ministerial Council – with Sinn Féin; and,
•    Being brought into the joint First Ministers’ office – with Sinn Féin.
And the foundation for all of this has been the political arrangements, based on absolute equality, which were negotiated by Sinn Féin over a decade ago in the Good Friday Agreement. Until two years ago, the DUP told everyone they would never accept such an outcome and that they would bury the Good Friday Agreement. So the DUP have found out a big lesson in the last two years: when Sinn Féin negotiate, we deliver.
And, what’s more, we’re prepared to play a long hand – we don’t do short-termism and we’re not into ‘stroke’ politics. Our agenda is too serious and our objectives are too important for any of that.
Some within unionism see developments as negative. They fear the promotion of partnership and equality. But they are wrong.  The developments of the last two decades, and the potential of the next two decades, are taking this society on a journey towards the Ireland of equals which was aspired to by the Presbyterian republican idealists of the United Irishmen over two centuries ago. This is the political reality for unionism.
In the time ahead the best option for unionists is, I believe, to join – as equal and influential participants – in the onward march towards all-Ireland unity and national reconciliation.
Yes, some within unionism are working to slow up progress. Some may veto certain short-term issues.
There are clearly some senior members of the DUP – and some in the Civil Service and British system – who miss playing the ‘Orange Card’. Others think that they can start to reverse the template of the Good Friday Agreement, with its all-inclusive power-sharing structures, its accountable political institutions, and its bedrock of equality and human rights for all. My message to them is clear: the old ways are gone – never to return.
The dice are no longer loaded in favour of ‘big house unionism’. Clearly, some senior unionists don’t like that fact.
But the hard lesson of the Peace Process is that – some day soon – even the Afrikaner wing of unionism will be brought to a place it never wanted to be. My strong preference, and that of the Sinn Féin leadership, is that all sections of the DUP – and indeed unionism – will now embark fully on the pathway to equal partnership, and a future of national unity and national reconciliation in Ireland.
For unionists, that pathway starts in recognising and embracing the equality agenda in Stormont and the other Good Friday Agreement institutions. The alternative to partnership and equality with Sinn Féin is deadlock and stasis.
All of our people deserve better than that.
They deserve the transfer of policing and justice powers.
They deserve to have full confidence in the partnership approach of those leading the political institutions.
I understand that this process presents enormous challenges for unionists, particularly their political leadership.
Together with the collective republican leadership, I have been at the forefront of the process of change on this island for over 20 years. I know what it means to take political risks and embrace political transformation.
Some unionists may be concerned about their political reputations. But the republican leadership has risked far more than reputation to bring about the Peace Process and provide the opportunity for peaceful political progress which has now opened up. Many of us have in the past – and continue in the present – to put our lives on the line because we are determined to ensure that all of our children will never again have to face the indignity of institutionalised inequality and the terrible outcomes of armed conflict. The long-term benefits of such a step forward by the DUP – for this entire society – would far outweigh the short-term risks that make them lose their nerve.
I am appealing to unionism to stand with us and work with us in building a society of equals. It’s now time for the leaders of political unionism  – currently the DUP – to join with Sinn Féin in hammering home the keystone of equality and cementing the bridge of hope to tomorrow’s new dawn of national reconciliation and national unity. We are currently in the middle of an important European election, with Bairbre de Brún as an outstanding Sinn Féin representative once again seeking election.
All republicans, democrats and progressive elements need to be backing Bairbre’s campaign with their votes on 4 June.
However, in less than a fortnight, it will be back to basics at the Assembly. Our Monday morning team meetings will once again be dominated by pushing Sinn Féin’s all-Ireland and equality agendas, and overcoming the obstacles created by the approach of other parties.
And as I look around the room, I will think about this tremendous occasion today - how far we’ve all come in the blink of a lifetime, and what will be achieved in the next few years. I’ll recall Kevin Lynch, his huge struggle and sacrifice – and that of his family. I’ll fill myself with pride at the calibre and the courage of the republican people – people like all of you. And I’ll have absolute confidence that the road we’re on will take us to the Republic.
Go raibh míle maith agaibh. Beirigí bua.