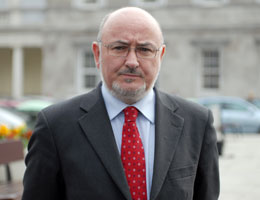 FOLLOWING last week’s release of the shocking Report of the Commission to Inquire into Child Abuse, the Irish Government has come under mounting pressure to undo a controversial deal it did with religious orders in 2002 to compensate victims of abuse in religious run institutions.
The Ryan Report showed that thousands of children were abused, raped, assaulted and terrorised over a period of three decades in institutions run mainly by religious orders in the 26 Counties.
Speaking after the release of the report last week, Sinn Féin President Gerry Adams said that all of its recommendations must be implemented but added that:
“The shameful deal between the government and the religious orders must be undone. Capping the religious order’s contribution at a paltry €127 million is nothing short of a disgrace.”
Then, on Tuesday, after almost a week of varied and contradictory statements on the issue by a range government spokespeople and in the face of huge public outrage, Taoiseach Brian Cowen called on the religious orders involved in the scandal to provide a substantial additional contribution for the victims. Speaking after a two-hour Cabinet meeting to discuss the recommendations in the report of the Ryan commission, Cowen said that it had found a much more systematic volume of abuse in institutions than was previously known or accepted by the orders.