OPINION: Seán Ó Floinn reports from the frontline of protests at the G20 world leaders' summit in the City of London 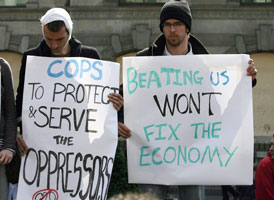 ‘Conditions ripe for arguing for a socialist economy’

AS the G20 leaders met in London last week to resuscitate capitalism, thousands of protesters took to the streets to voice their objection to the world’s dominant economic system that continues to implode and wreak social and economic havoc. On Saturday 28 March, 35,000 people marched under the slogan of ‘Jobs, Justice and Climate’ in a demonstration organised by Britain’s Trades Union Congress.
On 1 April – labelled ‘Financial Fools Day’ – some 5,000 protesters descended on London’s Bank of England. Peaceful protestsers converged at this bastion of capitalism. Regrettably, the carnival atmosphere later turned sour as a considerable section of those in attendance, masked and intent on causing trouble, hemmed in the crowd and proceeded to engage in indiscriminate and intermittent thuggery. They were the British police.
While a nearby climate camp with 1,500 environmental activists was baton charged, I found myself, along with 5,000 other protesters, hemmed in at Threadneedle Street, home to the Bank of England and nearby RBS bank. For eight hours the police refused to let anyone leave or enter the area, denying access to water, food and sanitation. Parents were even denied the chance to go back to collect their children.
This controversial tactic is known as ‘kettling’, whereby police hold protesters for hours on end against their will. This is clearly illegal detention and inevitably resulted in peaceful protesters becoming frustrated and angry. When we were eventually allowed to leave, one by one, each person was escorted out by a riot police officer, a number photographed, details taken, questioned and then searched. An estimated 122 protesters were arrested... but not a single banker.
Ian Tomlinson, a 47-year old shopworker, died of a suspected heart attack during this protest. The Independent Police Complaints Commission has received numerous corroborating complaints from observers who have stated that Ian Tomlinson was brutally assaulted by police and subsequently denied medical attention. A full public inquiry has been demanded.

‘SOCIALISING BANKS’ LOSSES’
In terms of the economy, US President Barack Obama remarked after the summit that “the patient had stabilised and was in good care”. However, the measures agreed at the G20 summit merely prescribed more neo-liberal medicine to be forced on the reluctant patient without operating on the terminal cancer of capitalism.
The G20 leaders agreed on a $1.1 trillion injection of financial aid into the global economy, trebling the resources of the IMF to $750 billion and promising the naming and shaming of tax havens. However, according to American Nobel prize-winning economist Joesph Stiglitz, throwing billions of public money into bankrupt private banks is tantamount to “the privatising of gains and the socialising of losses”. The avaricious bankers have been bailed out by their political friends while the ordinary working people suffer.
The key challenge for the Left now is to prevent neo-liberalism reasserting itself, which is exactly what the G20 decisions are attempting to facilitate.

NEO-LIBERALISM
Neo-liberalism is the cause of this crisis, the economic ideology largely attributed to Reagan and Thatcher in the 1980s, supporting free trade, the free market, privatisation, limits on public spending and lower taxation.
Post-G20 and the architecture of the world’s financial system remains virtually the same. As socialists, we must be adamant that capitalism cannot be reformed to ensure a fairer society. I applaud the direct actions of workers, faced with redundancy, occupying their factories from Waterford to Belfast, and also those French workers who have detained their capitalist bosses and compelled them to agree to justified job and wage demands.
We must resist house repossessions, job losses and welfare cuts. Mere political rhetoric is not enough, nor is resorting to settling for a ‘moral’ capitalism. An economic system that is guided by the principle of production for private profit and not for social need is anathema to any genuine socialist.
As economist John Maynard Keynes said:
“Capitalism is the extraordinary belief that the nastiest of men, for the nastiest of reasons, will somehow work for the benefit of us all.”
The fact that the task of saving the world economy has been handed over to the IMF is outrageous. This organisation has been notorious in forcing the ‘Washington Consensus’ on poor and developing countries. Through its ‘structural adjustment’ programmes it has forced numerous countries, in return for receiving loans, to radically reduce health, education and welfare spending; to privatise and deregulate state enterprises, and to constrain and even cut wages and roll back worker rights. Even on the day of the G20, the IMF was in Latvia, forcing the government to reduce public spending by 40 per cent in return for a loan.
The IMF is a weapon of mass economic destruction, controlled by the US with its veto power. It is inconceivable that this organisation, with its undemocratic governance and obsession with the economic policies that have propelled the world into the current crisis, has been awarded the task of reviving the world’s economy. The economists in the IMF and World Bank amass more in a day than what the poor earn in a year.

ECONOMIC APARTHEID
We are living in a 21st century apartheid system, created and maintained by capitalism. The capitalist class of bankers and elite politicians are creaming off profits and living luxurious lifestyles on the backs of workers who are now losing their jobs and homes.
The words ‘credit crunch’ sound like a breakfast cereal instead of mass unemployment, homelessness, poverty, inequality, despair and frustration.
We should not be surprised that the G20 agreed to revive capitalism. As James Connolly stated: “Governments in a capitalist society are but committees of the rich to manage the affairs of the capitalist class.” We do not need the reform of the capitalist system, we need it replaced.
Capitalism is unsustainable; financially, socially and environmentally. Politicians have called for measures to ensure financial stability but was the situation so rosy before?
Capitalism has caused 1.5 billion people to struggle to survive on less than $1 a day. It leads to a child dying from hunger every few seconds, while the world’s rich minority live lavish lifestyles of abundance.
The fact that there is world mass unemployment while there are a shortage of doctors, teachers and social workers makes a mockery of capitalism. The vast majority of those in employment work too many hours in monotonous roles.
The conditions are ripe to be arguing for a socialist economy, one that is planned and not subject to the volatile whims of a free market based on greed.
People are citizens, not merely consumers. The crisis in capitalism is not just a crisis in derivatives, toxic assets and the sub-prime mortgage sector; the crisis is the system itself.
One positive to emerge from the crisis is that socialism is more popular. As a saying by North America’s Cree Indians goes:
“Only after the last tree has been cut down and the last river has been poisoned and the last fish has been caught, only then will we realise that money cannot be eaten.”

Ian Tomlinson, who wasn’t protesting, was attacked by police and later died