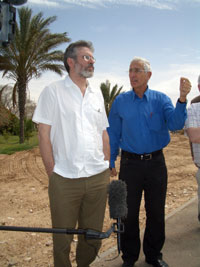 The Sinn Féin President meets with Shai Hermesh, a member of the centre-left Kadima party in the Israeli Parliament, the Knesset

‘Progress is possible in the Middle East’

BY RICHARD McAULEY
In Israel and Gaza

THE visit by Gerry Adams at the head of a Sinn Féin delegation to Gaza and Israel this month, after talks in Washington last month with Secretary of State Hillary Clinton and Special Envoy George Mitchell about the Middle East, made headlines across the Arab world, Israel and beyond. It was a world news story.
On 7 April, the Sinn Féin delegation – Richard McAuley, Ted Howell and Harry Thompson – visited the region for four days. This week, in the first of a two-part series (the second part will appear next week), Richard McAuley recounts their experience.

ON 27 December 2008, the Israeli Defence Forces (IDF) commenced an intensive military offensive against Gaza. It involved heavy artillery, an air bombardment and a ground attack.
Twenty-three days later, on 18 January, the IDF called a halt but by then almost 1,400 Palestinians had been killed and thousands more wounded. A huge proportion were children.
The statistics of this war are grim but the reality in the small strip of land that is called Gaza is much worse.

THE sights and sounds, the silences and smells of Gaza will stay with me forever.
There’s the father and mother standing in a hospital room waiting for their 13-year-old to die from bone cancer because the Israelis wouldn’t allow her to get the medical treatment she needed.
Then there’s the family living within a cave made from the twisted ruins of a bombed building after their home was blasted by Israeli shells.
The smell of burned timber in the hospital devastated by Israeli bombs.
The state-of-the-art radiation machine standing quiet because the spare parts needed for it to save lives cannot be brought into Gaza because of the Israeli siege.
The derelict ruined buildings with empty windows and huge holes punched through their walls.

Watchtowers
From the moment we drove through the huge gates, under sullen watchtowers and between the enormous blast walls of the Erez Crossing, we knew we were going into a prison – a monstrous affair in which one and a half million people have been held in the worst of conditions by the Israeli siege.
The derelict landscape which greeted us on the other side of the Erez Crossing – from Israel into Gaza – looked like a scene from some apocalyptic movie. But this wasn’t the work of clever Holywood designers and scenic artists or CGI experts – this was real. Real buildings, real workplaces, real homes, real farms, real schools, real hospitals. The hearts of real communities that had been bombed and bulldozed into rubble.
And within this landscape of twisted girders, collapsed buildings, of toppled walls and concrete blocks, human beings are trying to survive.
And good people in UNWRA, the United Nations Relief and Works Agency for Palestine Refugees in the Near East, in the International Committee of the Red Cross, in MFS and Oxfam, in the Palestine Red Crescent Society and countless other NGOs and individuals are working exhaustively to help over a million refugees, many of whom are still stunned – shell-shocked – by the destruction around them.
Gaza was not the starting point of our four-day visit to the region but the 48 hours we spent there have left memories and images of despair and pain and of hope and courage that are unforgettable.
Gerry and I were in Israel and the West Bank two-and-a-half years ago. Then we were unable to visit Gaza because of insufficient time. Following the 23-day Israeli assault on that besieged territory over Christmas and the start of the New Year, Gerry was determined to visit the Middle East again, and especially Gaza.
He wanted to talk to as many people as possible  – Israelis and Palestinians – and receive as much information as he and we could absorb.

support for the Palestinians
Irish republicans are in an exceptional position. Unlike most of those who are part of the enormous conflict resolution business around the world, republicans have experienced the reality of conflict and peace-making, and not just the theory.

Sinn Féin is for an end to:–
•    The Israeli occupation of Gaza;
•    The blockade and sanctions;
•    The wall which steals Palestinian land and divides families and communities;
•    The refugee camps.

With a new US President in Barack Obama and Secretary of State Hillary Clinton declaring that the resolution of Palestinian and Israeli issue is a strategic priority for the new US administration, and with the appointment of George Mitchell as Obama’s special envoy to the Middle East, Gerry believed that the time was right for a visit to the region and for the production of a report which might be useful to those likely to be involved in any new peace efforts.
Such an initiative appears likely. George Mitchell’s appointment has especially heightened interest in the Middle East into his role in the negotiations leading to the Good Friday Agreement.
Last month, when we were in Washington, Gerry and I and Rita O’Hare spent over an hour with Senator George Mitchell, mainly talking about the Middle East. In our meeting with Hillary Clinton we also discussed this issue.
In this context, Gerry felt very strongly that a visit to the region at this time and a report containing observations and suggestions could be helpful.

Our first day in Israel
So, four of us – Gerry, myself, Ted Howell and Harry Thompson – travelled to Jerusalem on Monday, 6 April. We arrived in the early hours of Tuesday morning and a few hours later met Tony Blair, the British former Prime Minister, in the American Colony Hotel.
Blair is in the region representing the interests of the Big Four or what is known as the Quartet – the EU, the USA, Russia and the UN. Latterly much of his focus appears to have been on economic development.
With the long lead-in to the US elections last November and the Israeli elections of last month, and the negotiations underway between the Palestinian groups in Cairo, there has been a political hiatus in effect for some time.
The plan for our visit was that we would spend the first day in Israel. Trocaire funds a number of NGOs in southern Israel specialising in trauma counselling for families living in Sderot. This Israeli city has been the target for many of the thousands of primitive Kasssam rockets fired out of Gaza, The Van Leer Institute in Jerusalem had also arranged a number of engagements for us.
Following an hour with Tony Blair talking about the current situation in the region, we travelled to the Sderot Resilience Centre and met local activists as well as representatives of the Israeli Trauma Coalition. We were told that the rockets have killed up to eight people in the seven years of their use and injured many others.
One activist at the centre told us:
“It is the uncertainty. The rockets can arrive at any moment and families have only seconds to take cover. Parents worry constantly about their children who no longer can play outside.
“Many families now have one room which is like a temporary bomb shelter and that is where they live and sleep. The constant worry is causing serious physical and psychological trauma.”
The trauma counsellors also brought us to the local market where we examined one of the bomb shelters the Israeli Government has built everywhere for citizens. It’s primitive and tiny and resembles a very small bus shelter.
By this point some of the media in Israel were reporting that we were to be refused entry into Gaza. The Israeli Government had asked for a commitment from Gerry that we would not meet Hamas. We refused to give such a commitment. Our position was quite simple – we would meet anyone who wished to meet with us, and especially democratically-elected representatives.
The Israeli Government had said that neither ministers nor officials would meet us. Apparently, this approach by the Israelis has so far succeeded in securing such a commitment from other delegations visiting Gaza.

On the kibbutz
From Sderot we travelled to the kibbutz at Kfar Aza (Gaza Village), where we met Shai Hermesh, a member of the centre-left Kadima party in the Israeli Parliament, the Knesset. Up to last month his party had been in government. Shai told us the story of Israel and its relationship, from his perspective, with the Palestinians. He brought us around the kibbutz and it was from there that we had our first real glimpse of Gaza in the distance beyond the barbed wire surrounding the village.
Here, as in Sderot, Gerry asked our Israeli hosts of their hopes for the future. All were sceptical of the Palestinian desire for peace but expressed the hope that it was possible. Almost all acknowledged supporting the recent Israeli assault on Gaza. When asked how they felt as they watched the attack proceed they expressed a ‘deep sadness’. There was no sense of jubilation.
Hours later, back in Jerusalem, we met Rabbi Arik Asherman from the Rabbis for Human Rights group. They have taken a very strong stand against human rights violations by the Israeli Government and its agencies and have stood with Palestinian families whose homes have either been destroyed or are threatened with destruction. He brought Gerry to meet several such families in east Jerusalem.
Later again, we met with members of the Van Leer institute and it was during the evening that we received confirmation that we were to travel into Gaza the next morning. The Jerusalem Post was still claiming the next morning we were not getting in.
The Jerusalem Post was wrong.
We were on our way into Gaza – what Gerry Adams was to call “a huge, outdoor prison”.