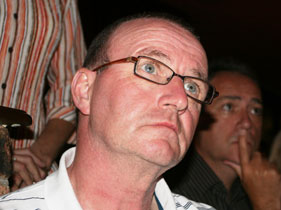 No place in changed political landscape for armed actions

A SEASONED republican commentator, a former internee and republican prisoner who was an adviser to the Sinn Féin team negotiating the Good Friday Agreement, says that the political landscape in which the IRA fought its campaign has totally changed. The actions of the so-called ‘Continuity IRA’ and ‘Real IRA’ have no place in Ireland today and will only hinder the campaign for a united Ireland and an end to rule from Westminster.
Writing in his weekly Irish News column last Thursday (12 March), Jim Gibney says unequivocally “I am not a pacifist” but describes the killing of two British soldiers and a PSNI officer as “wrong, morally unjustifiable and indefensible” in the changed political circumstances.
“The nationalist community lives in real time. A time of peace, not conflict, where there has been real change,” Jim Gibney says.
“The partition of this island and the presence of some British garrisons are unacceptable to me.
“I am not a pacifist. I supported the IRA at a time when the nationalist community was really oppressed. I have supported other armed struggles in Vietnam and South Africa, to name but a few. Armed struggle can only be legitimate when measured against the real level of oppression and suffering and must enjoy real support.”
But, Gibney argues, the North today is not the same as the one he grew up in. The North was a one-party, sectarian state. It was one where unionists dominated and discrimination, censorship, bans, curfews, internment, and murderous attacks by state forces on protesters was the order of the day. It was a place where nationalist voters and their families and aspirations did not count. It was, Jim Gibney recalls:
“A society in the grip of a powerful system of armed forces backed by repressive laws, where nationalists had no place in their own country, a society where our cultural identity, our language, was criminalised. A society where our choices were limited to sitting at the back of the bus and voting for constitutional nationalist parties that sat at the back of the benches, or fighting for our civil and national rights.

“The Peace Process and republicans changed all of that.
“Today, nationalists and republicans have significant political power and influence.”
In the first Executive, he says, Martin McGuinness and Bairbre de Brún between them controlled 70 per cent of the budget. Today Martin McGuinness is joint First Minister with the DUP’s Peter Robinson and nationalists and republicans are in other ministerial positions.
“Real change is represented by the all-Ireland Ministerial Council, by nationalist MLAs in the Assembly and various committees and in the strength and growth of the Irish language across the North.
“It is represented in the absence of British soldiers on our streets, in the absence of British fortresses, in the absence of a loyalist militia like the UDR or RIR, and in the dismantling of repressive laws.
“It is represented in the existence of the human rights and equality commissions, in the presence of republicans and nationalists on the Policing Board and in the new police service, the PSNI.”
The actions of armed micro groups who have usurped the name of the IRA have caused “widespread shock, anger and demoralisation among nationalists and republicans in whose name these Unreal IRAs claim to be acting”, including those who fought the war.
The leaderships of the ‘Real IRA’ and ‘Continuity IRA’ are “contemptuous of the opinion of the vast majority of republicans, men and women who really risked their lives, who sacrificed the best years of their lives in prison for freedom and who, in their collective wisdom, believe in the Peace Process.

“Does all that really count for nothing in their minds?” the former internee asks.
Oppression cannot be contrived or manufactured, Jim Gibney says.
“It cannot be conjured up out of history books or carried forward from a deep hurt, personal or political. It cannot be a figment of one’s imagination nor can it be made real through political doggerel.
“Oppression is felt as a result of actions by state forces, as a result of unjust laws, as a result of people being deliberately forced to the margins of society.
“That form of oppression no longer exists in the Six Counties.”
Jim Gibney acknowledges there still is “a legacy of wrongs to be rectified as a result of partition and conflict” but, he adds, Sinn Féin and others are overcoming that legacy by using their political power and influence.
“The people of this island are in a new place and there is no space in that place for those who use violence in the perverse claim that by taking lives they can add to our lives.
“They will not.
“Armed struggle or armed actions have no part to play in bringing about a united Ireland. In fact, in today’s Ireland, they will delay and hinder that very objective.”