Adams urges housing and jobs plan for Longford and Westmeath 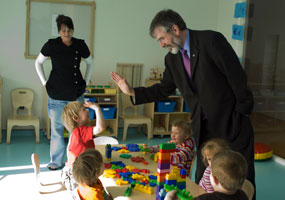 GIMME FIVE: Gerry gets down with the kids

SINN FÉIN President Gerry Adams was in Counties Westmeath and Longford last week with local election candidates Cllr Paul Hogan, Sorcha Clarke, Mick Kenny, Cllr Brendan Farrell, Conor Nolan, and Ciarán Grimes to see at first-hand how the recession is hurting Midlands counties.
In Longford, accompanied by Ireland North-West European election candidate Pádraig Mac Lochlainn, Adams backed calls for Longford County Council and other local authorities to secure derelict housing in return for development levies that are still outstanding.
He said developers who have not paid up money due to local councils must be pursued – either to pay the money owed or to give housing units, which can be used by the council to house those on housing waiting lists.

huge profits
The Sinn Féin president said that many developers made huge profits at the height of the construction boom and cannot now walk away from their responsibilities.
Adams said that in one year alone, unemployment in Westmeath has nearly doubled.
“We need to remember that these are not just mere statistics but real people who have families to care for and financial commitments to meet. Due to the policies pursued by the present government, these commitments often include exhorbitant mortgages and astronomical childcare costs.
“Many people in towns such as Mullingar are forced to commute to work in Dublin every day. Counties like Westmeath need a Government-led strategy to provide employment here in the county itself.”
Gerry Adams added that the Government’s budget last October did nothing to stimulate the economy nor protect and create jobs.
The Sinn Féin leader sent out a strong message to voters: Sinn Féin intends to make a significant impact at both the local and European elections in June.
“We want to win new seats and give everyone the opportunity where we can to vote Sinn Féin.”