Rallies against attacks on Peace Process 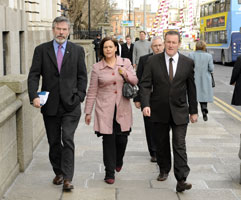 SPEAKING in the United States on last week’s killings of a PSNI officer and two British soldiers by so-called ‘dissident republican’ groups, Sinn Féin President Gerry Adams said the killings represent “a full-frontal attack on the Peace Process”.
Gerry Adams told the international media and US legislators:
“These attacks reflect the success of the process. The vast majority of people are opposed to what happened. The political institutions, the Peace Process and Sinn Féin are as much a target of the perpetrators of Saturday night’s attack as those they killed or injured. They have to be resisted – politically, democratically peacefully.”
The Sinn Féin president said that the groups responsible want to destroy the hard-won progress of recent times and cannot be allowed to succeed.
“There is also an onus on the British Government and the PSNI to resist any temptation or any demands for a return to the bad practices of the past. This would be equally wrong. It would also sideline the Peace Process and political leaders.”
He added:
“The popular will in Ireland is for peaceful and democratic change. I’m sure that’s shared by our neighbours in Britain and further afield. So everyone has a responsibility to defend the peace.  There can be no turning back. Those I have met here understand this. The Peace Process is clearly a work in progress. It is a journey we are on and a journey we have to complete.”

MEETING WITH TAOISEACH
A Sinn Féin delegation involving Gerry Adams, Dublin MEP Mary Lou McDonald and Northern Executive Minister Conor Murphy met Taoiseach Brian Cowen and Minister for Foreign Affairs Micheál Martin at Government Buildings in Dublin on Thursday, 12 March, in relation to the developments in the North.
Following the meeting, Gerry Adams said:
“It was a very good meeting. The Taoiseach is clearly seized by the imperative of the governments and parties uniting in defence of the Peace Process.
“It is crucial that there is no breathing space given to these unrepresentative groups and that there is no sense of ambiguity about our collective opposition to their actions.
“I also stressed in our conversation the British Government must not step outside the political process. It is up to the police to deal with these matters.
“Political leaders, including the governments, must ensure that the process of positive change continues to deliver for citizens, particularly those in disadvantaged sectors of our society.”

DÁIL MOTION
Speaking in the Dáil on Wednesday, 11 March, on an all-party motion on the killings in the North, Sinn Féin Dáil Leader Caoimhghín Ó Caoláin TD unreservedly condemned the killings. He said Sinn Féin will not be deflected from its peace strategy that it had democratically adopted and successfully pursued.
He accused so-called ‘dissident’ groups of pursuing a militarist agenda primarily designed to justify their own existence and perpetuate their own factions.
“We have seen a process of demilitarisation in the Six Counties as a key part of the Peace Process. The British Army was taken off the streets. Numbers in the Six Counties were very significantly reduced. Barracks and posts, including those along the border, have been closed. What will these attacks achieve, apart from the grief to families and renewed fears in communities?
“They will serve only to delay the ongoing process of demilitarisation. They may lead to the deployment of more rather than fewer British troops. Remilitarisation is what these groups want. They should not get what they want. These groups will not succeed in their attempts to derail the Peace Process which has the full support of the overwhelming majority of the Irish people and of all political parties.”
Ó Caoláin commended the North’s First Minister and deputy First Minister and the Executive in the Six Counties for their leadership since the attacks and said the best response to the attacks is to carry forward with even greater determination the politics of partnership and peace.
“The actions of these factional groups have no popular support. Rather than hastening the day of Irish unity and national independence, they try to undermine the only strategy currently on offer that has the potential to deliver our republican objectives. But in any effort to undermine the republican peace strategy they will fail,” the Cavan/Monaghan TD said.
“We in Sinn Féin remain resolute in our commitment to achieve our stated goals by peaceful and democratic campaigning. This approach has the support, and indeed the growing support, of the Irish electorate, North and South.
“Those who want to turn back the clock would do better to turn over a new leaf and, if they are sincere in their stated wish to end the British presence in Ireland, invest their energies and talents in positively working for that objective.”,
He added that the objectives of Irish unity and freedom can only be achieved by the united and concerted effort of all republicans seeking to persuade people of all opinion, “including those who have been traditionally hostile to our goals, of the good sense and the tremendous opportunities that can and will flow from the reunification of Ireland and the establishment of a truly pluralist, inclusive and democratic republic across the whole island of Ireland”.
Ó Caoláin said that there may be some who, while not supporting the groups who carried out the killings, “may baulk at the condemnation of the killings”, in particular the killings of members of the British Army.
“But,” the Sinn Féin leader in the Dáil continued, “those killings were wrong because they were in breach of a peace process entered into in good faith by Irish republicans, a process out of which came all-party negotiations and all-party agreements which, while falling short of our ultimate objectives, are respected and upheld and adhered to by Irish republicans and endorsed by the vast majority of the Irish people”.
And the border counties TD had another message for those who might support such attacks.
“The Irish Republican Army leadership and Volunteers have long since declared that the war is over. The unrepresentative factions, who do not deserve the name ‘republican’, are engaged in a futile effort to reignite conflict and resume war but they will fail.”
He said he has no doubt that there are still people within the British system who would like to turn back the clock to justify their own existence and to perpetuate their militarist organisations. This must not be allowed to happen either.
“The British Army, MI5 or any other covert force should have no role in this response and, in fact, no role in Ireland at all,” the Sinn Féin TD said.

RALLY
Meanwhile, 5,000 people joined a Belfast rally in defence of the Peace Process organised by the Irish Congress of Trade Unions last Wednesday, 11 March.
ICTU Assistant General Secretary Peter Bunting said this was an opportunity for “all workers and their families to express their abhorrence at these murders and the direct threat to the Peace Process”.
Other rallies took place on the same day in Derry, Newry, Lisburn and Downpatrick.
Speaking at the rally outside Belfast City Hall, which was attended by Belfast Mayor Tom Hartley, Bunting said the killings of a PSNI officer and two British soldiers were “an assault on every citizen who supports peace”.
He added that the “show of strength from civil society” would send a clear message to those who carried out the attacks of  “our determination that not a further single worker will be injured, intimidated or murdered by those who seek to derail the Peace Process”.
ICTU President Patricia McKeown said unions stand “united with our political leaders to say to those who would derail a process that we have fought so hard for, and sacrificed so long for, that there is no space in this society for you”.