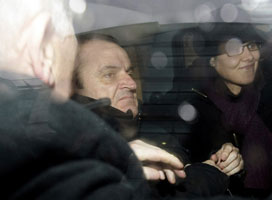 BELFAST Recorder’s Court ruled on 9 March that Basque nationalist Iñaki de Juana Chaos is eligible for extradition to Spain. He has been paroled until May when he will appeal the decision at a further hearing.
A European arrest warrant for de Juana Chaos was issued by the Spanish authorities to the PSNI in November. The Belfast court has since then discussed the legal issues surrounding the warrant, ruling last week that the charges alleged in the warrant of “glorifying terrorism” constitute an extraditable offence.
De Juana Chaos spent 21 years in Spanish jails for his role in ETA (Basque Homeland and Freedom) armed attacks during the 1980s. He moved to Ireland after he was released in August last year.
The Spanish warrant alleges that, on the day of his release, he gave a woman a letter to be read out in his name at a rally in Donostia in Euskal Herria (the Basque Country), that allegedly “publicly justified terrorism”.
But the Spanish authorities admit they do not have this letter and de Juana Chaos’s defence lawyer stated in court his client did not authorise anyone to speak on his behalf. The comment allegedly read out at the rally was “Aurrera bolie” – a Basque expression meaning “Kick the ball forward.”
The Spanish Government is basing its legal effort to extradite de Juana Chaos on somebody at a rally in Donostia saying “Kick the ball forward” without any evidence that the comment was de Juana Chaos’s or that it somehow constitutes a terrorist offence.
This relentless harassment of de Juana Chaos by the Spanish courts is not surprising in the context of the current ramped-up repression in the Basque Country, where several nationalist parties and candidates were banned from participating in the 1 March elections and where more than 700 pro-independence political activists are being held prisoner.
The Belfast judge accepted the advice of the Spanish authorities that the phrase “Kick the ball forward” constitues “praising terrorism” and that this offence has a legal equivalent under the British Terrorism Act 2006.
De Juana Chaos’s lawyer, Edward Fitzgerald, said he would contest the move on human rights and procedural grounds.
An Phoblacht
44 Parnell Sq.
Dublin 1
Ireland