International : Freeman forced to withdraw from key US intelligence body 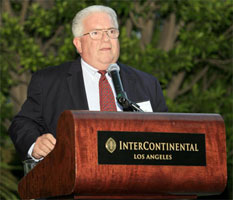 Israeli lobby claims another high profile victim in US

LAST WEEK, the Israeli lobby claimed another high profile victim and proved conclusively that while Israel’s reputation may be at an all time low internationally, in Washington its power remains undiminished.
In February, the Obama administration had chosen a former ambassador, Chas Freeman, to chair the National Intelligence Council (NIC), a key body that assesses and compiles intelligence reports for the president.
Within weeks, Freeman has withdrawn his candidacy for the post and explicitly blamed his departure on a well-orchestrated campaign by the lobby that had sunk to “character assassination, selective misquotation, the wilful distortion of the record, the fabrication of falsehoods and an utter disregard for the truth.”
Freeman had served in the Clinton administration and also held the highly-sensitive post of US ambassador to Saudi Arabia.  A seasoned diplomat well accustomed to the ways of Washington, even he was taken aback at the ferocity and dishonesty of the Israeli lobby.
Freeman’s fatal flaw, as far as the friends of Israel saw it, was to have gone public with repeated criticisms of their favoured nation’s conduct in the Occupied Territories.
Given that numerous international bodies such as Amnesty International have said Israel is answerable for war crimes committed during its recent assault on the civilian population of Gaza, Freeman’s views can hardly be said to be either controversial or outlandish.
On their own, they were not. But had he taken up his post at the NIC, Freeman would have had the power to at least influence how the Obama presidency viewed Israel and its activities. That was the appalling vista which the Israeli lobby moved to counteract.
Following his withdrawal, Freeman angrily attacked the poisonous role played by this most powerful of pressure groups:
“The aim of this lobby is control of the policy process through the exercise of a veto over the appointment of people who dispute the wisdom of its views, the substitution of political correctness for analysis, and the exclusion of any and all options for decision by Americans and our government other than those that it favours.”

SEMINAL STUDY
Freeman’s graphically angry characterisation of the lobby sits well with that provided by two US academics, Walt and Mearsheimer, in their now-celebrated work The Israel Lobby and US Foreign Policy.
Published in 2007, this seminal study characterised the role of the lobby as one which effectively entwined Israeli interests with those of US foreign policy, making the two indistinguishable. Walt and Mearsheimer argued that anything which was inimical to Israeli interests was, through the power of the lobby, made equally inimical to US interests.
Thus they claim that the unconditional backing for Israel which the lobby brought about meant that US foreign policy in the Middle East actually damaged, rather than furthered US interests.
The remarkable fact about their study was the fact that it was ever published at all and it was damned, demeaned and diminished when it did appear. Yet it overcame the opprobrium and struck a real chord with the public, making it to the New York Times bestseller list.

MILITARY AID
But as the fate of Chas Freeman clearly shows, the lobby’s power is undimmed. And some of its most important work occurs well away from public scrutiny.
In August 2007, the US and Israel signed a Memorandum of Understanding (MoU), under which the US agreed to provide some $30 billion in military aid to Israel, until 2018. The first payment was made in 2008 and amounted $2.5 billion. It will increase to over $3  billion annually over the coming years.
The money is provided to Israel in the form of grants and there is no obligation to repay it. Some ‘aid’ recipients, such as Egypt, are required to repay their monies.
Israel has received over $100 billion in total aid since 1949, of which $53 billion was solely military aid.
The only stipulation attaching to this military package is that the Israeli military must spend 74 percent of each year’s allocation in purchasing US military goods and services. So, the aid acts as both a support to Israel’s military and a subsidy to the US military-industrial complex, the second most powerful lobby in Washington.
It is therefore certain that most of the 1,300 plus Palestinians murdered and the thousands maimed during the assault on Gaza, were victims of subsidised US weaponry.
Ironically, US law states clearly that no overseas aid can be made available to any country that consistently violates human rights. It would seem that a legal challenge to this aid would have a genuine chance of success, whilst also forcing Israel to publicly defend and explain the misdeeds of its armed forces.
But more importantly, what key message is sent to Tel Aviv by the forced withdrawal of Chas Freeman and the undying commitment of the US taxpayer?  Business as usual.
Why bother to even contemplate behavioural change when your power goes unchallenged and you have a guaranteed war chest of almost unparalleled abundance.
The settlements go on, the assaults on civilian populations go on. Send the bill to Washington.