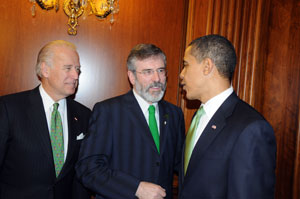 In conversation: US President Barack Obama and Vice President Joe Biden with Sinn Féin President Gerry Adams who presented Obama with a booklet especially made by children and young people in west Belfast

THE North’s First and deputy First Ministers Peter Robinson of the DUP and Martin McGuinness of Sinn Féin met with US President Barack Obama in the White House on St Patrick’s Day where they discussed a range of issues including the economic downturn and political developments in the North.
Following the traditional presentation of a bowl of shamrock from Taoiseach Brian Cowen at the St Patrick’s Day White House event, President Obama commented on the Irish Peace Process and the recent attacks by so-called dissident groups, saying that people in the North had responded “heroically” to the latest incidents. He added that watching former political adversaries unite in the face of the attack on the Peace Process, he had never been so confident that peace would prevail. He said that his administration would always stand with those working for peace in the North.
Sinn Féin President Gerry Adams attended the Speakers’ lunch as part of the St. Patrick’s Day celebrations in Washington. In conversation with President Obama and Vice President Joe Biden the Sinn Féin leader presented the US President Obama with a booklet of his election campaign and of his family especially made by children and young people in west Belfast.
Later in the evening, Adams attended the St Patrick’s Day Reception in the White House.
St Patrick’s Day also provided the backdrop for a meeting between Gerry Adams and the party’s US representative, Rita O’Hare, with US Secretary of State Hillary Clinton and Deputy Secretary of State Jim Steinberg at the US State Department in Washington DC.
The Sinn Féin leader then met with the Congressional Friends of Ireland Committee in the Capitol Building that was attended by 16 members of Congress.
Both meetings provided Gerry Adams with an opportunity to brief the administration and legislative leaders on the progress that has been made in recent years in the Peace Process and in the political institutions in the North.
Adams said that the discussions centred on the implementation of the outstanding issues of the Good Friday Agreement, including an Acht na Gaeilge and the transfer of powers on policing and justice and other matters.
“I also raised the issue of the undocumented Irish in the USA,” Gerry Adams said.

$30M INVESTMENT
The recent attacks by self-styled republican groups were also addressed by the Sinn Féin president.
“I made our opposition to these actions clear, as well as our determination not to allow these groups to set the political agenda or turn the clock back to conflict.
“I outlined Sinn Féin’s positive agenda for change, our efforts to secure investment – including the announcement on Monday of $30m from the New York State Comptroller Tom DiNapoli – and our two conferences planned for the east and west coasts of the USA in June on the theme of ‘A United Ireland’.”
On Tuesday, Gerry Adams addressed the National Press Club in Washington DC and held a series of meetings with senior trade union leaders, US Special Envoy to the Middle East Senator George Mitchell, and Senator Chris Dodd.
The Sinn Féin leader will also be addressing students at Harvard University.