Sinn Féin calls for an alliance for change 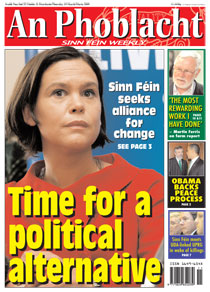 Time for a real political alternative

THE ELECTORATE has lost confidence in the Government. Fianna Fáil and the Greens have no plan, no vision and no courage. The longer they remain in office, the worse our economic situation will get. Ireland needs change.
The question people are asking is not will the Government fall, but what could replace it?
Writing in The Irish Times recently, Fine Gael leader Enda Kenny outlined what he would do if in government. He talked the language of fairness while once again scapegoating the public sector, offering nothing but spending cuts and lay-offs.

To create long-term, sustainable and equitable economic recovery we need a fundamental change of values and of social and economic policies. This is something that neither Fianna Fáil nor Fine Gael can offer

Fine Gael need to explain how they would cut public expenditure without damaging already-under-funded public services. They need to identify which 5,000 public sector workers they would sack. They need to explain how adding to the dole queue and damaging public services can assist economic recovery.
In truth, there is little difference between the failed policies of Fianna Fáil and those of Fine Gael.
For decades, both parties advocated the unsustainable tax regime that has created such a hole in our public finances. For decades, both parties supported the privatisation of our public services, creating a two-tier health system. For decades, both parties advocated social and economic policies that have left 100,000 children in this state living in relative poverty.
Change won’t come by replacing a failed Fianna Fáil-led government with a Fine Gael-led coalition. We need more than just new faces at the Cabinet table.
To create long-term, sustainable and equitable economic recovery we need a fundamental change of values and of social and economic policies. This is something that neither Fianna Fáil nor Fine Gael can offer.
In calling for a new alliance for change at our Ard Fheis in February, this is exactly what Gerry Adams had in mind — not only a change of government but a real change of direction.
So what could an alternative do if in government tomorrow? What would Sinn Féin do? We would:

•     Put job retention and creation centre-stage and develop a three-year job-creation strategy;
•     Stimulate immediate employment by investing in schools, rail infrastructure, green technology and the agri-food sector;
•     Introduce measures to develop indigenous exports and increase support for small- and medium-sized businesses;
•     Ensure that bank credit is available to sustain small- and medium-sized businesses;
•     Introduce a three-year moratorium on home repossession and stop illegal evictions;
•     Introduce fundamental tax reform that is sustainable and just;
•     Invest in world-class public services, ending the two-tier health and education systems;
•     Scrap the public service pension levy;
•     Open discussions with trade unions, employers and the voluntary sector to produce a real national recovery plan based on principles of equality and solidarity; and
•     Sort out the banks – this means sacking the bankers, not retiring them with golden handshakes. Investigations of Anglo Irish and all other banking institutions with cases referred to the DPP for prosecution. We need a new, robust financial regulatory system.
At the heart of our economic recovery programme would be job retention and creation. The only way to secure the economy is through economic growth. The Government cannot simply cut or tax its way out of this crisis.
The haemorrhage of jobs, brands and skills must be stopped. A three-year job-creation plan is vital. We would mandate a national jobs task force to develop detailed, costed proposals and targets to replace the 164,952 jobs lost to the economy over the past 12 months. The strategy would focus on hi-tech information technology and renewable energy markets.
Our job-creation strategy would be underpinned by a new approach to education and public finance. Increased investment in education is urgently needed if our workforce is to meet the challenges and grasp the opportunities of the 21st century.
We need investment in retraining, including a national literacy drive; in primary education, particularly in information technology; and in university education.
Job creation and improvements in education will require immediate investment. This can only be achieved with a balanced public spending programme that combines sensible borrowing and meaningful tax reform.
Borrowing should be for strategic investment and must be time-limited.

Sinn Féin is ready to join with those political parties, trade unions, community and voluntary organisations who seek a real political alternative

Tax reform requires the end of tax shelters, tax exile status and an overhaul of tax reliefs, as well as the creation of multiple bands and rates, including an upper band for high-earners, to make our taxation system progressive, fair and efficient.
We must end tax avoidance and evasion by the wealthy. The Commission on Taxation must be mandated to return their report before the end of the summer session of the Dáil.
Getting the right policies is crucial if we are to get people back to work. However, we cannot identify the right policies if we do not have the right values. Greed, inefficiency, waste and corruption have been the hallmarks of governments in this state for too long.
It is time for an egalitarian alternative. It is time for an alternative that seeks to combine economic success with social responsibility; that fosters prosperity and equality.
It is time for a society that sees economic growth as a means to an end and the well-being of all as the ultimate benchmark of success.
Ireland needs a united, progressive and democratic movement for change – Sinn Féin is ready to join with those political parties, trade unions, community and voluntary organisations who seek this real political alternative.
It is time for a new alliance for change.