Loyalists can't remember anything and deny everything 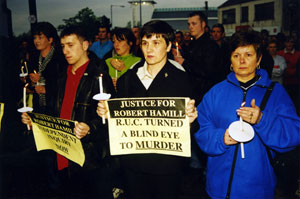 LOYALIST witnesses appearing before the inquiry into the killing of Portadown Catholic Robert Hamill on 27 April 1997 continue to display the kind of casual contempt that characterised the sectarian murder at the time.
Six loyalists were originally charged with the murder of the 25-year-old father of three but, within a year, all charges were inexplicably dropped.
The Hamill murder, described by one journalist as “a casual kind of lynching”, became the focus of a public campaign for justice. In 2004, Canadian judge Peter Cory recommended a public inquiry into the killing.
Rory Robinson (37) was one of the six loyalists initially charged with the Hamill murder.
According to witnesses, Robinson repeatedly jumped up and down on Robert Hamill’s body as he lay unconscious on the ground. Appearing at the inquiry last week, Robinson claimed that he had suffered memory loss and could not remember anything about the attack or even if he was in Portadown that night.
It was clearly a case of ‘I know nothing’ as Robinson gave increasingly bizarre answers to a series of questions put to him by inquiry lawyers. Robinson even claimed he’d never heard of the UVF or the IRA or the Maze Prison, despite having spent five months on the LVF wing of the jail while awaiting trial for murder.

Rory Robinson even claimed he’d never heard of the UVF or the IRA or the Maze Prison, despite having spent five months on the LVF wing of the jail while awaiting trial for murder

Robinson claimed he was unaware of sectarian tension in Portadown during the mass mobilisation of Orangemen at Drumcree demanding to march through a nationalist area along the Garvaghy Road in the 1990s. He denied having any loyalist sympathies despite requesting to be housed with LVF inmates while on remand.
Questioned by the Hamill family’s barrister, Barra MacGrory, if he had been interested in ‘The Troubles’, Robinson said he couldn’t remember. Asked if he had been aware that the North had suffered 30 years of violence, Robinson again said he didn’t remember.
Robinson told the inquiry he couldn’t remember being charged with murder, didn’t remember going to jail or the name of the jail where he was held. He could not remember why he had requested to be held on the LVF wing while his co-accused opted for the UVF wing.
Asked how he had remembered to attend the inquiry hearing, Robinson replied: “My wife reminded me.” Asked by another barrister how long he had been married, Robinson claimed he could not remember. “What is the last thing you remember?” enquired a barrister. “Drinking that glass of water,” Robinson replied smugly.
However, Robinson was forced to change tack when questioned about a loyalist tattoo commemorating 1690, the date of the Battle of the Boyne, on his arm. Asked to show the tattoo to the inquiry team, Robinson refused, claiming that it was not relevant.
Inquiry Chairperson Edwin Jowitt reminded Robinson that he would decide what was relevant. Robinson’s legal team later confirmed that their client did have a “Rem 1690” tattoo. Following the hearing, the inquiry chairperson announced he would be asking the PSNI chief constable to investigate Robinson in connection with a possible perjury charge.
While Rory Robinson couldn’t remember, Allister Hanvey had “no knowledge”, “no idea” and “no explanation”.
One of the six initially charged, Hanvey remains a main murder suspect. Appearing at the inquiry hearing, Hanvey denied being warned by the RUC to destroy forensic evidence which might have linked him to the killing.
A statement given by Hanvey’s future wife, Tracey Clarke, in 2000 alleged that a named RUC officer had telephoned Hanvey the morning after the attack and warned him to burn his clothes because his house was about to be raided. Clarke also claimed to have witnessed the same RUC officer warning Hanvey at the scene of the attack to burn his clothes. Clarke subsequently married Hanvey and withdrew all her earlier statements against him.
At the inquiry hearing, Hanvey denied all knowledge of any such telephone call. “It’s all just total and utter lies,” said Hanvey.
Hanvey admitted being in Portadown on the night of the murder but, despite corroborated witness evidence, denied involvement in the killing. One witness reported seeing Hanvey hit a man over the head with a bottle.

Asked why witnesses place him at the scene, Hanvey said he had no idea. “I have no explanation for that.” Despite witnesses also placing Hanvey at a party with his co-accused a short time after the fatal attack, Hanvey claimed to have been at the home of a relative.
Jim Murray, stepfather to Tracey Clarke, told the inquiry that, on the morning after the attack, she had confided in him that Hanvey had been involved in the murder. Murray said his stepdaughter had described her future husband as “an animal” and had said she wanted nothing more to do with him.
Later, during a meeting with Hanvey “to sort things out”, Tracey told her stepfather that Hanvey had been “quite proud of what he had done”. Hanvey denied describing Hamill as “only a Fenian bastard” to Clarke during that meeting.
Despite requesting to be held in the UVF wing while awaiting trial for murder, Hanvey denied any loyalist paramilitary connections. Evidence from a prison officer, William Leatham, who already knew Hanvey because they both frequented a martial arts club in Portadown, claimed Hanvey had admitted killing Hamill. Challenged about the alleged admission, Hanvey denied even knowing Leatham.

IGNORANCE: Despite worldwide publicity, suspect Rory Robinson says he was ‘unaware’ of the Orange parades controversy around Garvaghy Road