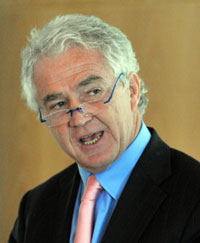 SECRET multi-billion euro deposits between banks to deceive auditors, shareholders and financial markets; a €300 million share deal scam to prop up stock prices; bank executives with multi-million euro foreign currency loans; multi-million euro bonuses being paid to senior management despite massive losses; a Finance Minister who doesn’t read the small print of vital reports; and senior bank chiefs who refuse to tell us why they engaged in serious corporate malpractice. Welcome to just one week in the Irish banking sector.
Price-waterhouseCoopers report into the six main financial institutions in the banking sector was given to the Government at the end of October. Department of Finance mandarins had brought it to the Financial Regulator’s attention when reviewing it. Brian Lenihan read it – but not all of it. Brian Lenihan was – and still is at the time of writing – the Minister for Finance.

The report ran to six volumes but Lenihan missed one key finding: that Irish Life & Permanent (IL&P) had deposited €7 billion into Anglo Irish Bank in the week before the Anglo Irish year-end where it would be able to declare a wholly false and misleading accounts and balance sheet. The money was transferred back to IL&P within a week.
It is hard not to believe that the Anglo Irish board and its chairperson, Seán FitzPatrick, were not engaged in financial fraud by publishing inaccurate accounts.
FitzPatrick had resigned his post as chairperson of Anglo Irish in late December 2008 after it was disclosed that, for eight years, he had an arrangement with the Irish Nationwide Building Society whereby loans he had taken out with Anglo Irish would be temporarily transferred to Irish Nationwide so again they would not show up on Anglo Irish public accounts. His loans were up to €87 million. Other directors also had loans from the bank; the total amount of loans to directors was €150 million.
At the time of his resignation, FitzPatrick declared that he “did not in any way breach banking or legal regulations” but admitted that “on reflection it was inappropriate and unacceptable from a transparency point of view”.
FitzPatrick had been chairperson of Anglo Irish since 2005. For the previous 18 years he had been the bank’s chief executive and the driving force behind some spectacular growth and profitability – growth that we now know was based on loans to speculators and developers whose recent poor performance has driven Anglo Irish to insolvency and nationalisation.
Since his December resignation, FitzPatrick has had little to say publicly, though he also resigned from the board of Aer Lingus and some other smaller Irish companies. This week, FitzPatrick refused to appear in front of the Joint Oireachtas Committee on Economic Regulatory Affairs.
The committee wants to question him about the hidden loans and a €300 million share scam where Anglo Irish lent ten key investors monies to buy into Anglo Irish, falsely driving up the share price. FitzPatrick’s excuse for not appearing is legal reasons!


It has transpired that Financial Regulator Patrick Neary knew since January 2008 of the secret Irish Nationwide deal; in January 2009 he resigned on a full pension of €143,000 annually and a golden handshake of €630,000

Sinn Féin Economy spokesperson Arthur Morgan TD said that legislation is needed “to ensure that Seán FitzPatrick and the likes of him can be brought – kicking and screaming if necessary – before the committee”.
Morgan described Anglo Irish as being “rotten to the core”. He added:
“The Government will have to act immediately by appointing a High Court inspector to both Anglo Irish and Irish Nationwide.”
Questioning the Irish Government’s motives for nationalising Anglo Irish, Morgan said:
“The constant flow of scandalous revelations emanating from Anglo Irish Bank show that it is a poisoned institution that never should have been nationalised”. This is all the more pertinent given that the Minister for Finance had access to vital information in October, weeks before the proposed nationalisation of Anglo Irish, about the true state of play at the sinking bank. Yet Lenihan did not disclose to the Dáil or the public the key details regarding Anglo Irish.”
The final key issue in all of this debacle is the abject failure of the banking regulators both in terms of the roles played by the Central Bank and the Irish Financial Services Regulatory Authority (IFSRA).

The former head of the IFSRA, Patrick Neary, has resigned since the revelations of the secret FitzPatrick loans. It has transpired that Neary knew since January 2008 of the secret Irish Nationwide deal; in January 2009 he resigned on a full pension of €143,000 annually and a golden handshake of €630,000.
Not only do we need to fix the banking system we need a new and effective regulatory regime – the one we have now clearly doesn’t work. It didn’t spot the DIRT fraud in the 1990s,  National Irish Bank interest loading, or illegal offshore accounts and the AIB FX currency overcharging revealed just two years ago. This week’s regulatory lapses are just the latest in a long line of failures.
In 2006, Seán FitzPatrick gave a brief colour piece interview to the Irish Independent. When asked “What drives you nuts?” FitzPatrick replied: “The Hollywood set: people who aren’t real, bureaucracy, falseness.” Prescient maybe?

A year in the life of Anglo Irish Bank

• January 2008
Financial Regulator Patrick Neary discovers that the Anglo Irish chairperson has secret loans totaling €87 hidden from the public and shareholders and that this practice had been ongoing for eight years.

• 18 December 2008
FitzPatrick resigns as chairperson of Anglo Irish after the €87 million loan arrangement with Irish Nationwide Building Society is made public.

• 20 February 2009
Lenihan publishes a censored version of the Price-waterhouseCoopers report on Irish banking.