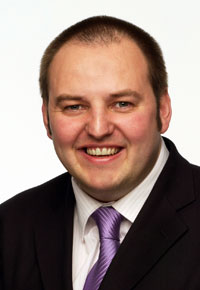 SPEAKING on RTÉ’s Morning Ireland programme this week on an Irish Times poll regarding voting intentions in another referendum on the Lisbon Treaty Sinn Féin Lisbon Campaign Director and North West EU Candidate Councillor Pádraig Mac Lochlainn said the poll meant little as it had taken place in the absence of the government showing the people the “colour of it’s money” on proposed Lisbon re-run ‘guarantees’.”
Mac Lochlainn called on the government to publish the guarantee text so that a national debate can begin.
The Donegal Councillor said: the “poll on Lisbon means little in the absence of the wording of the Lisbon Treaty re-run being published, the fact is this poll has taken place in a vacuum. The government has yet to publish the ‘guarantees’ it has secured on a limited number of issues raised by the electorate on 12 June.  The government needs to publish the text of the ‘guarantees’ so that a national debate on the Treaty re-run can begin.

RECKLESS TACTIC
“Ireland’s place has always been firmly within Europe, Sinn Féin and Irish voters have been very clear about their commitment to the EU.  The government’s attempt to reshape the Lisbon re-run debate to one of being in or out of Europe has been a reckless tactic. To suggest that accepting the Lisbon re-run in the absence of legally binding protocols on workers’ rights, public services and tax sovereignty would be good for the economy is simply not credible. The same issues for farmers, SMEs and the developing world still exist.
“The fact remains that ratifying the Lisbon Treaty would give away our automatic right to a commissioner. The Government’s ‘deal’ may see the commissioner remain for an unspecified period of time, but the power to reduce the size of the commission will be given to the council and sooner rather than later we will see an end to one commissioner per member state.
“Equally, declarations are not legally binding. They do not have the same legal status as the text of a treaty or protocols to a treaty. They are exactly what they are called, political declarations made by politicians with no legal status or force. They are like the promises of a government at election time, made only to be broken.
“The government needs to publish the text of the ‘guarantee’ so the debate on the Lisbon re-run can begin.”