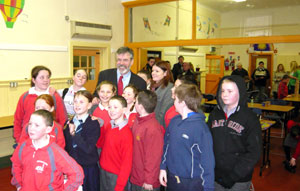 SINN FÉIN President Gerry Adams was in Kilkenny, Kerry and Limerick last week for a large number of engagements with community development groups, resident organisations, local businesses, chambers of commerce, trade unions and local people.
Adams met a large number of people on his tour in the three counties and carried out a number of interviews with local media outlets. He also addressed a public meeting in Limerick on the theme ‘Irish Unity makes Economic Sense’.
While visiting Kerry, the Sinn Féin president responded to the revelations surrounding Anglo Irish Bank and Irish Life & Permanent and the Government’s failure to hold the banking sector to account.

'It is clear that the ‘Golden Circle’ of the 1980s is alive and well in Irish politics. Once again it is the actions of bankers, property developers and inept ministers that has almost brought this country to its knees
– Gerry Adams

Speaking from Kerry, Gerry Adams said:
“The Government’s failure to deal with this crisis has meant that this country is linked with corruption the result of which is Ireland’s reputation being damaged internationally. It is clear for all to see that the golden circle of the 1980s is alive and well in Irish politics. Once again it is the actions of bankers, property developers and inept ministers that has almost brought this country to its knees.
“For a government minister to admit that he didn’t bother reading critical documents is intolerable. Finance Minister Brian Lenihan should be removed and this government should resign from office. The details that have emerged over the last number of days about cooking the books at Anglo Irish Bank and Irish Life & Permanent are nothing less than corporate corruption. Banking executives in both institutions must be investigated and those who have been – and indeed still are – behaving illegally should be charged and subjected to due process.”
Speaking on the run of job losses that have hit Ireland in recent times, Adams said:
“Government spokespersons continually make the point that there is little they can do about the global downturn which is resulting in foreign-owned companies leaving the state. However, there is a lot that they could do to offset the worst effects of the global recession by ensuring that local businesses and local employment is enabled to survive and expand.
“Sinn Féin wants to see a Government-led plan to get Ireland back to work. Job retention and creation must become their mantra. This must include fast-tracking business start-ups, front-loading critical infrastructure and retraining. We need a stimulus package including immediate reduction in VAT.

'Sinn Féin wants a Government-led plan to get Ireland back to work. Job retention and creation must become the mantra

“We must stop wasteful spending and duplication while protecting frontline services.
“We need to sort out the banks to ensure that Irish businesses can get access to finance and people at risk of losing their homes can get immediate support.
“Finally, the wages of those on low and medium incomes must be protected. They cannot be expected to carry the can for an economic mess they had no hand, act or part in creating. If positive, imaginative and just policies are implemented now they can help turn the economy around.
“For some considerable time, Sinn Féin and others warned that Government over-reliance on the property market and its failure to reform the tax system would result in a crisis in the public finances.

“The Government chose to ignore our warnings and it is the ordinary people of this country who are now paying the price.
“However, I have no desire to dwell on the past and Sinn Féin wants to see policies enacted now that will steer this country and this economy in a direction that prevents further job losses and creates new job opportunities.
“Working families across Ireland now need hope for the future. It is the job of all those with political responsibility to provide that hope and to provide solutions.”
Speaking after the Sinn Féin president’s tour through Kilkenny, Kerry and Limerick, Ken O’Connell, Southern co-ordinator for the party’s Organisational Development Unit, said:
“It was important to have the Sinn Féin president out and about in these areas to see at first-hand the effects the current economic crisis is having and the fear among many people at the prospect of losing their jobs and their homes.
“It also gave us a chance to get our message out on the airways as the national media seem not to have lost their Section 31 mentality and the radio interviews alone put us in touch with over 200 thousand listeners.”