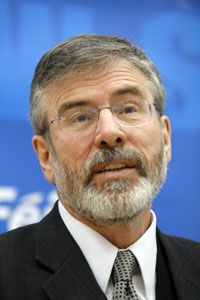 LAST Saturday Sinn Féin President Gerry Adams and South Dublin County Councillor Seán Crowe met with Terry Delany whose son Robert was brutally shot at his home in Tallaght on 24 October where he lived with his partner and two young children.

Postman Robert Delany was shot at 6.30am as he looked out the window of his apartment at Russell Rise, off Fortunestown Way to see who was buzzing on his door.

In recent weeks a number of stories have appeared in the media alleging that republicans were somehow involved in the brutal attack or that the name of republicanism was being used by those responsible. Both Gerry Adams and Seán Crowe assured the family that Robert’s shooting had nothing to do with republicans and that those responsible are criminals. They have called on anyone with information to bring it forward to the Gardaí. Seán Crowe repeated these sentiments at a public meeting in Tallaght organised by the Delany family.

Speaking to An Phoblacht this week Gerry Adams said:

“This incident had nothing to do with republicans and it is reprehensible if those involved tried to use the name of Irish republicanism to cover themselves.”
He went on: “A grievous wrong has been done to this young man and to his family and they are entitled to justice. I call on anybody with information about the shooting to either contact the Delany family, any representative of Sinn Féin or the Gardaí.”
In recent times a number of politically motivated journalists have waged a campaign to link republicans with criminals and criminal activities. This campaign has been a matter of huge frustration and anger to republicans throughout Ireland, many of whom work at the coalface in local communities dealing with the effects of anti-social behaviour and serious crime.
Sinn Féin has repeatedly made clear it’s commitment to law and order and the fight against crime. The party supports An Garda Síochana, the PSNI and the criminal justice systems North and South and republican representatives are fully engaged with policing structures and institutions in both parts of the island.
Sinn Féin TDs and MLAs have made the case time and again for an effective policing and justice system that defends the rights of citizens against the activities of criminals and the party is very clear that to do this, the police require the support of the public and their political representatives.
To underline this position and in the wake of similar spurious newspaper articles, Sinn Féin TD Martin Ferris, speaking at a major Sinn Féin conference just last year, said:
“I have been a republican all of my life and I am unequivocal in saying that the Gardaí need and deserve the support of local communities, of elected representatives and of everybody in the fight against crime.
“Nobody, no matter who they are or whatever their past involvement in the republican struggle, can use the republican cause as a cloak for criminal activity. If they attempt to do so, they will be repudiated and should face the full rigours of the law.
“ I will be damned if the sacrifices made by so many men and women in this country over many years in the cause of Irish freedom will be hijacked or tarnished by criminal thugs who seek to pursue their own agendas or to line their own pockets.
On Monday Gerry Adams once again appealed for the public to assist in the quest for justice for Robert Delany.
He said:
“The shooting of Robert Delany is an act of thuggery carried out by criminals.  Anyone who has information on what happened or who is responsible should immediately contact the Gardaí or their local Sinn Féin representative.
“The shooting of Robert Delany has nothing to do with Irish Republicanism.  Republicans take a very serious view of any individual or group engaging in criminal activity, including acts of violence or intimidation, seeking protection or to legitimise their criminal acts by masquerading as Republicans.”
“I whole-heartedly support the work of the Justice for Robert Delany Campaign in seeking to bring justice for Robert, and I encourage all Republicans to do likewise.”

‘Nobody, whatever their past involvement in the republican struggle, can use the republican cause as a cloak for criminal activity. If they attempt to do so, they will be repudiated and should face the full rigours of the law’