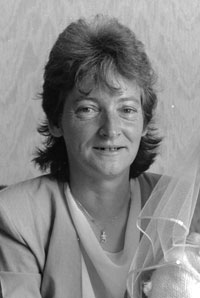 THE death occurred in January of Tallaght republican and community activist Breda Bracken.
At her funeral in Bohernabreena, County Dublin, Sinn Féin Councillor Seán Crowe described Breda as “a small woman, a pocketful of energy who packed a dozen lifetimes into her short life, fighting for her family, her community and her country”.
A founder member of the local Sinn Féin cumann, despite Breda’s hectic family life and community campaigning she campaigned for Sinn Féin at every election.
Seán Crowe said that Breda and husband Ritchie had 12 children – eight boys and four girls – “and, at the last count, 18 grandchildren”.
“Breda loved every one of her children and grandchildren and, like many an Irish mother, you could see her eyes sparkle with pride when she talked  of them and their many  achievements in life.”
Breda was a Dubliner born and bred, proud of her origins, Seán Crowe said, and she was an Irish republican who cared deeply about what was happening in her country, her beloved  city and her community in Tallaght and Killinarden. She was a committed opponent to British rule in Ireland.
One of her daughters remembers quite clearly her mother calling to her school and tackling the school teacher on his British interpretation of Irish history.
“Breda told him in her own unique way, ‘Either stop peddling lies or my children are coming home.’”

COMMUNITY CENTRE
And Breda practised her politics on the streets and in her community.
“When the family moved to Cushlawn in Tallaght, 27 years ago, there was very little, if any, work, a non-existent bus service, no shops, no doctor, no hospital, no community facilities and very little money in homes throughout the area,” Seán Crowe recalled. “People struggled to survive. Life was hard.
“It was Breda and a handful of volunteers who organised and collected from residents for the building of the Community Centre.”
“As a member of the Concerned Parents Against Drugs in the early 1980s, she took the campaign to the doors of drug dealers.”
It was Breda, Marian Tolan, Jane Wade and Catherine Tynan meeting  together as mothers that eventually brought about the establishment of CARP, an organisation that has gone on to help hundreds of those suffering drug addiction  and gave support to their families, Seán Crowe said.
A voluntary community activist, Breda’s typical week involved: Tuesdays, Community Council meeting; Wednesdays, Youth Club; Thursdays, Estate Management; Fridays, the Disco; Saturdays, the Bingo. “And  I presume Sunday was a day of rest.”
Even at Christmas, she was up at half-five in the morning in the Community Centre, making sure people had their turkeys, hams and other essentials for Christmas.

MEMORIES
“She will leave a gap in all our lives but I know we will all carry around in the days, weeks, months and years ahead memories of Breda: the wife and mother, the grandmother, the community activist, the neighbour and the friend.
“She enriched our lives and we are all better for having known her.”
Seán Crowe offered deepest sympathy to Breda’s husband Ritchie; sons  David, Ritchie, Anthony, Stephen, Paul, and Derek; daughters Linda, Yvonne, Andrea and Jennifer, and Breda’s brother Mick, sister Molly “and all the relations and friends who have travelled from near and far” to bid Breda farewell.

• FUNERAL: The remains of Breda Bracken leave the church for Bohernabreena Cemetery