Diego - A triumph of the human spirit 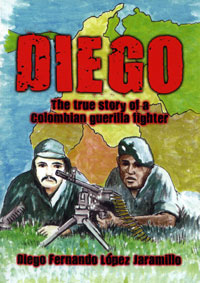 THE English version of Diego – The True Story of a Colombian Guerrilla Fighter was launched last Friday in the Sinn Féin bookshop in Dublin.
The writing of the work is a story in itself and a triumph of the human spirit. While in prison in La Modelo Prison in Bogata in 2003, Jim Monaghan of the Colombia Three met and befriended a Colombian ELN guerrilla fighter called Diego Fernando Lopez Jaramillo, who had lost both hands in a grenade explosion. Against all the odds, this young man, with the encouragement and support of Jim, managed to write a book, which Jim was able to get back to Ireland.
The book was initially published in Irish and now it has been translated into English. Through its pages, Diego gives an account of the fighting that took place in the mountainous regions of Colombia, his capture and subsequent imprisonment. He is serving a 40-year sentence.
Writing the book with no hands was obviously an arduous task and, as Jim says, “It took ages.” He wrote by gripping the pen between his two wrists. To aggravate matters, the first draft got lost during a period when Diego was moved from Modelo to other prisons in different parts of Colombia. When Diego was returned to La Modelo six months later, Jim persuaded him to write it all over again. So, having encouraged him to complete such a feat, Jim sent the work back to Ireland for publication. Jim says:
“I kept my promise to him partly as a way of thanking the brave and generous Colombian people who helped me survive.”
The book was launched by Anne Barr who has been in Colombia herself and visited the Colombia Three. She witnessed first-hand the conditions in which the men were held.

• Diego – The True Story of a Colombian Guerrilla Fighter is published by the Sinn Féin Bookshop and costs €10.
An Phoblacht
44 Parnell Sq.
Dublin 1
Ireland