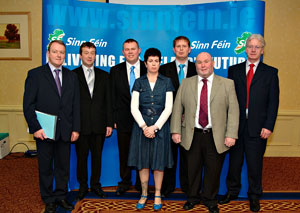 SINN FÉIN has launched its largest group of candidates in Laois/Offaly since the 1920s for the forthcoming local government elections. Speaking at the launch in The Heritage Hotel, Portlaoise on 27 January, Laois County Councillor Brian Stanley thanked members for his nomination to stand again for Portlaoise Town Council and Laois County Council.
Alan Hand now joins Stanley in the campaign for seats on Portlaoise Town Council.
“Alan is a diligent and effective campaigner and a first class community worker and I am in no doubt that he has the ability to be an excellent Town Councillor.
“With six candidates, this is the largest number put forward by Sinn Féin in Laois, probably since the 1920s. We also have an excellent candidate, Brendan Killeavy contesting Tullamore Town Council and Offaly County Council. Brendan is one of the most committed political activists that I have come across in recent years”, Stanley said.
“All of our candidates live and work in their local communities. They know what the local issues are and are actively trying to have them addressed. Put simply, they are not ‘parachute candidates’, something that the voters will see plenty of between now and June.
“Presently I am the sole Sinn Féin elected representative in the constituency. But with the support of party members I have endeavoured to create the maximum impact in terms of political change, providing effective representation to our constituents and assisting local communities. We have a good track record and a good line up of candidates, but they won’t get elected without your active help and support”, he said.
Stanley urged Sinn Féin supporters to rally behind the Sinn Féin candidates saying: “Leave no stone unturned and ensure that we have a team of Sinn Féin Councillors in this constituency in June.”