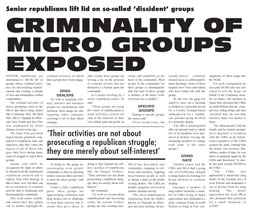 SENIOR republicans are determined to ‘lift the lid’ on groups whose criminal activities are discrediting republicanism and creating a climate of fear and intimidation within communities.
The criminal activities of micro groupings such as the INLA and others using names like Continuity IRA, the Real IRA, IRLA, Óglaigh na hÉireann, Saor Uladh and Saor Éire was condemned by Gerry Adams several weeks ago.
The Sinn Féin president urged anyone genuinely committed to republican aims and objectives and who values the legacy of all of those who gave their lives during many years of struggle to reject these groups.
Adams said while he recognised the right of others to dissent from the mainstream republican position and to oppose Sinn Féin strategy, if that is their view, but there can be no toleration of criminal activity that is burdening and threatening the community.
This week senior republican sources have also spoken out, to further highlight the criminal activities in which these groups have been engaging.

DRUG DEALERS
As well as targeting ordinary families and business people for intimidation and extortion, these gangs are also targeting other criminals extorting a cut in their illicit earnings.
In doing so, the gangs are encouraging even greater criminality as thieves and drug dealers increase their activities to meet the micro groups’ cash demands.
Under a false republican guise, these groups are approaching criminals and drug dealers not to challenge or stop their activity but to ensure they get a share. In other words, these groups are levying a tax on the proceeds of criminal actions that are themselves a burden upon the community.
In a media briefing by a senior republican source, he said:
“These groups are using the veneer of republicanism to mask activities carried out only in the interests of their own selfish gain and profit. In doing so they degrade the selfless sacrifice of republicans like the Hunger Strikers. “Their activities are not about prosecuting a republican struggle; they are merely about self-interest.”
He continued:
“As well as besmirching republicanism and increasing crime, the actions of these groups are also creating insecurity and instability at the heart of the community. Most people in the community see these groups as indistinguishable but each of these groups is distinct, or the latest evolution from one to another.”

SPECIFIC GROUPS
Turning to specific groups, the source said:
“Over recent years, the INLA has descended into criminality, engaging in robberies and extortion, targeting local business people as well as taking a share in the profits of drug dealers. The CIRA are prolific gangsters involved in similar criminal activity.
“The latest manifestation originating from the RIRA, known as Óglaigh na hÉireann, has been carrying out personally-based vendettas dressed up as so-called punishment shootings. Some of those targeted have been individuals who have fallen out with the group.
“In one case, the gang was asked to carry out a shooting in Belfast as a personal favour for a County Armagh-based spokesperson for a ‘republican’ pressure group involved in a domestic dispute.
“The IRLA disintegrated after an internal feud in which two of its members were murdered in Belfast, leaving the remaining members to realign with some of the other groups.”

GOING RATE
Another source said the CIRA and INLA had a going rate of £10,000-plus charged to drug dealers in exchange for being allowed to continue dealing.
Amongst a number of drug-related incidents, a member of CIRA living in Spain approached and intimidated a petty criminal living in north Belfast to bring in four consignments of illicit drugs into the North.
For each consignment he was paid £4,000 and was also asked to sell the drugs on behalf of the Continuity member in Spain. The member in Spain then informed the CIRA in north Belfast that the criminal was selling drugs and they ‘arrested’ him. He was then forced to hand over money to them.
“He subsequently told his family and his family attempted to negotiate a resolution with the CIRA on his behalf. Senior members of the CIRA assured the petty criminal that the matter was resolved. But, within a matter of days, he was taken at gunpoint again by the CIRA and threatened. To date, he has paid around £90,000 to the CIRA.
“The CIRA also approached a small-time drug dealer in the Gransha area of west Belfast and demanded a cut in profits from his drug dealing. The dealer approached the local INLA who promised their protection for a small ‘donation’ of £3,000.”