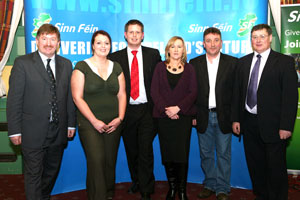 LOUTH Sinn Féin has selected the party’s candidates to contest the local elections for the five county electoral areas with some strategic changes.
The party now has five sitting councillors on Louth County Council: Tomás Sharkey and Jim Loughran (Dundalk/Carlingford), Kevin Meenan (Dundalk South), Pearse McGeough (Ardee Area), and Imelda Munster (Drogheda East).
Councillor Tomás Sharkey is to stand in the Dundalk South area with Edel Corrigan and  Councillor Jim Loughran the Dundalk/Carlingford Area. Edel is a new young female candidate who hopes to join the Sinn Féin team on Louth County Council.
In the Ardee Electoral Area, sitting councillor Pearse McGeough, who is known to be one of the hardest-working members of the council, will be seeking re-election.
In Drogheda East, sitting Councillor Imelda Munster will again seek election, and in Drogheda West, new candidate Paddy McQuillan will run.

MAKING A DIFFERENCE
Following the selection of candidates, Pat McVeigh, Chairperson of Louth Comhairle Ceantair, congratulated the candidates and praised the sitting councillors for their hard work and commitment since their election in 2004.
“I believe,” he said, “that the Sinn Féin contribution on the council has made a difference to the people of Louth.”
Speaking on behalf of the selected candidates, Councillor Tomás Sharkey thanked the party for the honour of being chosen to represent it.
“The local and European elections are an opportunity for Sinn Féin to increase our representation on councils and in Europe.
“There are many challenges ahead for everyone in this state. We are all suffering because of the failed and shameful policies of the present and past governments. We in Sinn Féin have been listening to the ordinary people about their concerns surrounding their future and the future of their families. They are rightly worried but do not believe the Government parties, Fianna Fáil and the Greens, care for their plight.
“It appears that Government are more intent on serving their Galway and Cheltenham tent cronies than sorting out the economic mess they have created.
“We listened to the people last year when the majority of people voted against the Lisbon Treaty. We took our position to oppose that treaty and were privileged when it was the position supported by the people. We will always listen and learn and respect the voice of the people.”
An Phoblacht
44 Parnell Sq.
Dublin 1
Ireland