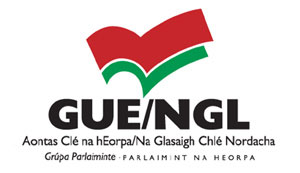 DUBLIN MEP Mary Lou McDonald led a delegation of party representatives to meet with trade union leaders in SIPTU’s Liberty Hall last week to discuss the recent decision by Dublin Bus to reduce its fleet by 120 at the cost of 290 jobs.
When the cuts were announced in January, the Dublin MEP described as “incomprehensible” the withdrawal of over 10 per cent of the capital city’s public transport bus fleet which services 140 routes.
Despite the withdrawal of services, due to come into effect from the end of February, Transport Minister Noel Dempsey has refused to intervene, stating that the matter is solely the responsibility of Dublin Bus management and the unions. Such a hands-off approach is unacceptable, she said. It is the government’s responsibility as holder of the public’s purse to ensure that progressive 21st century integrated transport solutions are delivered for the people of this city.
Dublin is heavily dependent on car usage, primarily because government policy for decades has prioritised road building above public transport infrastructural projects and the necessary resources to support them. Ironically, the union leaders noted that gridlock cost Dublin Bus €60m in 2005. This cost can only have increased over the last three years and congestion in the city has worsened.
This decision is also bad news for the environment. Ireland made commitments alongside its European partners in December to cut its greenhouse gas emissions by 20 per cent by 2020. Clearly, the Government, despite the influence of the Green Party as partners in government, has little intention of honouring these commitments.
In December of last year, Minister Dempsey signed off on fare increases despite passenger numbers falling in 2008. Such inept decision-making starkly illustrates Fianna Fáil’s inability to grasp the big picture.

Union leaders also highlighted the issue of increased operational costs following the Government’s decision to withdraw excise duty relief on fuel last year following its failure to secure ‘approval’ by the European Commission to retain the special derogations attached to the EU Energy Tax Directive which allowed for reliefs on fuel for public transport.
Prior to the Government’s ending of the excise duty relief from 1 November, Minister Dempsey stated his administration has been unable to reverse this decision by the EU Commission for reasons of EU restrictions regarding state aid. It is worth remembering that the Lisbon Treaty further restricts member states’ ability to invest and protect public services.
In February 2008, Minister Dempsey shelved plans to privatise a number of Dublin Bus routes. Privatisation of public services and critical infrastructure such as communications and health has proved to be a disaster for citizens and businesses alike. Private operators cherry-pick routes, which leaves public service provision volatile. Following Dublin Bus’s announcement, Fine Gael was immediately out of the traps, advocating the privatisation of the capital city’s bus routes. Enda Kenny & Co regularly lambast the Government over its failure to deliver state-wide broadband and Ireland’s crumbling health service but his party’s comments this week prove that, if in government, Fine Gael would pursue the same failed ideology of Fianna Fáil.

Mary Lou McDonald told journalists that Dublin City and Ireland can have a 21st century integrated, affordable public transport service that could be the envy of Europe

Union leaders were at pains to impress to Mary Lou McDonald that Dublin Bus – and indeed Bus Éireann who also intend taking 150 buses from its fleet of 1,300 at a cost of 322 jobs – provides not only a transport service but also a social network which connects rural, urban, isolated and other non-profit making areas.
Following the meeting, Mary Lou McDonald told journalists that Dublin City and Ireland can have a 21st century integrated, affordable public transport service that could be the envy of Europe.
She called on the Government to frontload infrastructure projects that can employ workers from the construction sector and increase our competitiveness and that such infrastructure projects must include public transport.

SIX-COUNTY MEP Bairbre de Brún has called for a much more proactive involvement between the Assembly, local councils and the EU institutions. De Brún held a series of meetings last week with local government and the Assembly where she emphasised this message.
One such meeting was when she appeared before the Assembly OFMDFM committee (which deals with Europe) at their invitation to discuss the Assembly’s role in EU issues and ways of enhancing engagement with EU issues.
She told the committee of the importance of the EU Task Force report commissioned by European Commission President Barroso and how the Assembly needs to grasp its full potential:
“It is very important that the Executive and the Assembly proactively engage with European programmes, policies and structures to gain the best services for local people.
“We can gain a lot more from EU programmes and funding opportunities and the exchange of experience.”
Bairbre de Brún pointed out that the Assembly could also gain a lot of experience and insight from visits or staff exchanges.
“In essence, the EU Task Force report lays out the possibilities and opportunities ahead of us all,” she said.
“If each Assembly committee debates the relevant section of the Task Force Report with the social partners, the voluntary and community sector and with the statutory bodies that are already engaged in their particular field they can make recommendations as how to take full advantage of the opportunities that exist.”

RECOVERY PLAN
More generally, de Brún has been alerting politicians and community groups alike about the EU’s proposed Economic Recovery Plan. The plan, currently being rolled out by the European Commission, is the EU’s response to the current economic crisis.
“The proposed changes including more possibility for EU funding for tackling fuel poverty through the fitting of energy-efficient materials in low-income housing as well as an acceleration of the structural funds spending are opportunities that a well-connected and EU-aware Assembly can benefit from.”

THE ‘Progressive London’ conference, an initiative of former London Mayor Ken Livingstone attended by 700 activists last week, was addressed by MEP Bairbre de Brún among a wide range of speakers including MPs, trade union leaders, key figures representing London’s diverse communities, the arts, campaigning groups, legal and civil liberties organisations, writers and academics, and many others.
Discussions included developing progressive policies, the global economic crisis, an emergency discussion on Gaza and the Middle East, the age of change, multicultural cities and the emerging world of the 21st century.
The Six-County MEP addressed a packed ‘Green Cities’ session alongside leading environmentalists Charles Secrett and Tony Juniper, Green Party London Assembly Member Darren Johnson, and former London Deputy Mayor and Labour Assembly Member Nicky Gavron.
As a member of the European Parliament Environment Committee and the Temporary Committee on Climate Change, Bairbre has played a leading role in pressing for urgent action on the threat of climate change, including developing policy at a European level.
She told the ‘Green Cities’ session that the economic downturn had been used by some as an excuse to roll back on the necessary climate commitments but she argued that, on the contrary, the crisis means that “more than ever, we need to fully commit to progressing to a green economy and to investing in innovation and clean technologies”.

INCINERATION
Opposing any notion that nuclear energy is ‘clean or green energy’ or that incineration is a ‘green method’ of waste management, she said that green technologies or alternative fuels, had, in fact, been standard and mainstream in many parts of Europe for a number of years.
She praised the contribution of Ken Livingstone as Mayor of London, in promoting “the type of global, progressive network cities need”. She added:
“From the common-sense use of eco-friendly light bulbs to the development of sustainable transport systems, cities can learn from each other about how the 80 per cent of our global emissions which come from cities can be reduced as quickly and as economically as possible.”
She added:
“The kind of anti-congestion [traffic] measures introduced in London by Ken Livingstone can also play an important role.”
De Brún argued strongly that the current period of economic uncertainty should not be used to undermine the need for fighting climate change nor used as an excuse to roll back on the progress on setting targets for emissions reductions.
“Investing in new technologies and moving much more decisively to renewable energies as well as energy efficiency can create more jobs, lower energy bills and indeed save lives as well as livelihoods.
“Cities are an obvious place where energy efficiency needs to be secured,” she added, citing housing as a major area where this efficiency can be maximised. De Brún called for a specific target for “low-carbon, good-quality, well-insulated, energy-efficient, affordable housing”.

GREEN HOMES
She also praised London’s Green Homes Programme under Ken Livingstone which focussed on low-income housing and which could help keep many out of fuel poverty. Livingstone’s successor, Conservative Mayor Boris Johnson, has now cut back on this proposal, “one of many good policies that he has overturned”.
Pointing out that some 80 per cent of the EU’s population live in cities or urban areas and produce 40 per cent of the greenhouse gas emissions in transport, de Brún pointed out that the new EU climate and energy package of legislation sets “binding targets which can only be met through sustainable means if cities lead the way”.
She argued that efficiency, reduction and exchange of best practice are all necessary steps along the way.
“A change is coming... to our economy, to our attitudes and to our way of life. It is a change which can come efficiently and quickly, or slowly and at great cost.”

PALESTINE
The conference also hosted an emergency discussion on Palestine, in which Bairbre de Brún raised the issue of the suspension of the EU-Israel trade agreement.
She said:
“Progressive people around the world mobilised in solidarity with the people of Palestine and to demand peace and an end the Israeli onslaught over recent weeks.
“The growing demands for a just settlement, based on self-determination, peace and inclusive dialogue show that there is strong support internationally for a better way forward.”

A Brief history of the EU

About the EU: The first in a series of explanations about the EU to be published in the run-up to June’s elections to the European Parliament

THE Treaty of Rome, which established the European Economic Community, was signed in 1957 by the governments of Italy, France, Belgium, Luxembourg, Germany and the Netherlands.
Treaties are agreed by heads of state and/or heads of government of all EU countries, and ratified by parliament or by referendum, depending on the country. This process requires the unanimous agreement of all member states.
A series of treaties have been signed, each one revising the previous treaties and continually enlarging the fields of competence of what we know today as the European Union.
The most recent treaty adopted was the Nice Treaty, which was rejected in a 26-county referendum in 2001. The other governments prevailed upon the Irish Government to run a new referendum which was passed.

DRAFT CONSTITUTION
In 2004, the member state governments agreed a draft Constitution, seeking again to extend the areas of competence of the EU, strengthening the influence of larger member states, increasing the militarisation of the EU, and shifting key social and economic policies further to the right.
Voters in France and the Netherlands rejected the Constitution in 2005.
In a referendum in 2008, the Irish people rejected the Lisbon Treaty, seen by most as an attempt to re-package and re-sell the Constitution. Instead of renegotiating the treaty, the Irish Government will put the same treaty to a second referendum in 2009.
Over the years, more countries have joined the EU. Today, there are 27 member states.