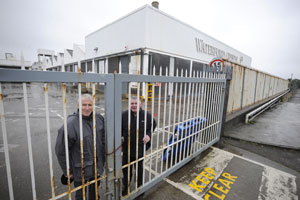 A SIT-IN by workers at the Waterford Crystal plant in County Waterford looks set to continue as progress fails to be made by the receiver of the company in securing their employment and pension entitlements as An Phoblacht goes to press.
The workers began the protest last Friday after an announcement was made that the world-renowned crystal-making operation would be closed. Staff are seeking to have this decision overturned. There are further worries down the road for the workers if the worst outcome transpires and the plant closes: Waterford Crystal’s pension scheme is said to be about €111m in deficit, which has many workers also worrying about redundancy payments.
David Carson of Deloitte, which is overseeing the company’s receivership, has continually stated that the decision to close the plant cannot be reversed. Meetings he has had with workers and union representatives have been described as acrimonious. Workers have vowed to continue their rota-based occupation of the plant until the decision is reversed.
One worker occupying the plant is local Sinn Féin Councillor Joe Kelly. Councillor Kelly criticised David Carson for going back on his word that he would not close the factory down while there were investors interested in buying the company.
The Waterford workers have enjoyed the solid support of the local community with businesses in the area supplying food and water as well as mattresses for them to bed down on. Families have been making regular deliveries of sandwiches. Taxi drivers also came to a halt in a work stoppage for an hour on Saturday as a show of solidarity. It seems the whole community is aiming to ensure that Waterford Crystal continues as a viable manufacturing plant.

WORKERS UNITED
The protesting workers have numbered in their hundreds over the past week with up to 100 sleeping within the confines of the plant’s visitors’ centre each evening as they await details of a bid that may save their jobs. As of yet, this news has not arrived, while the Government has said that it may be open to giving state aid to a buyer who would maintain crystal manufacturing in Waterford City. The Waterford-based Minister for Arts, Sports and Tourism, Martin Cullen, said that he and Tanaiste Mary Coughlan have met with prospective buyers from both Clarion and KPS companies and said that they are ready to “engage the state agencies with them” – despite the fact KPS are clear they have no intention of retaining the jobs in Waterford. Martin Cullen was careful to add that he did not want to give “false expectations to the workers”.
The workers are understandably angry at the situation in their workplace.
Union meetings have been occurring throughout the week  – one attended by over 700 current and former workers. Calls have been made by the current workers, who have over 1,000 years of collective experience between them, for David Carson to reverse the decision made last Friday that ceased manufacturing and opted to make 480 out of 780 workers redundant. Carson said that there is simply no cash to keep the manufacturing going.

RAMIFICATIONS FOR REGION
The knock-on effects of the closure of the Waterford Crystal manufacturing plant, which brings thousands of tourists to the locality, will have huge ramifications for the region and the people of Waterford have not underestimated this with a 2,000-strong crowd taking to the streets last weekend in an expression of solidarity with the workers.
Two hundred staff have been retained in certain areas such as customer services and around 10 per cent of manufacturing staff were kept on to maintain the furnace which is a vital component in the manufacturing of crystal.
At the beginning of the week, the former chief executive of Waterford Crystal, John Foley, met with David Carson to discuss the plant. John Foley is also a member of the Clarion Capital investment group.
The workers who are holding out in the plant have called on the Government to provide financial and other assistance to the firm to purchase the company and save their jobs. It is believed that trade union Unite will seek a financial package of up to €30m from the Government to ensure that any redundancy given to workers is protected alongside pension entitlements that are not met by the firm’s buyer. It is unknown how much Clarion has bid for the company but it is believed that if their bid is successful they will seek to make 200 workers redundant.
Sinn Féin’s spokesperson on Workers’ Rights, Deputy Arthur Morgan, met with the workers and trade union leaders in Waterford Crystal during the week to discuss the situation and show solidarity with the workers.
“The Government has a crucial role to pay in this dispute therefore it cannot continue with a hands-off approach,” Arthur Morgan said.
“The south-east region has been ignored by successive Fianna Fáil-led governments, the result of which has been the loss of 16,000 jobs – 10,000 on the Waterford register alone.”
Deputy Morgan said that the workers had made a compelling case for keeping the factory open due to the strategic importance of the Waterford Crystal Centre for the south-east. Its closure would lead to an irreversible impact on local B&Bs and other businesses that are supported by virtue of the Waterford Crystal brand’s popularity.

SINN FÉIN members from the Kevin Lynch Cumann raised the Starry Plough flag above the worker-occupied Waterford Crystal factory on Saturday (31 January), joining 4,000 people from the city showing their support for the 480 staff who were told on Friday that they are redundant with immediate effect.
Mark Anderson from the Kevin Lynch Cumann told An Phoblacht:
“Support from the local community in Waterford for the 100 workers in occupation has been tremendous.
“Local shops and members of the public have been providing everything from food and drink to sleeping bags and blankets so that the occupation can continue until the demands of the workers are met  – however long that takes.”