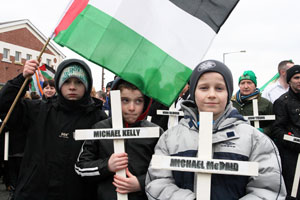 • REMEMBRANCE: Children bearing the names of some of those killed on Bloody Sunday in Derry 1972

37 years on and still waiting for justice

THOUSANDS of people turned out on Sunday to take the route of the original Civil Rights protest against internment without trial when 13 unarmed marchers were shot dead by the British Army’s Parachute Regiment on 30 January 1972 in what became infamous around the world as Bloody Sunday and “Ireland’s Sharpeville”. A fourteenth victim died later of wounds.
Thirty-seven years on, the families of the 14 victims are still fighting for justice and Sinn Féin MEP Bairbre de Brún told the rally at William Street – the spot where the parade was stopped by British Army paratroopers in 1972 – “justice delayed is justice denied”.
The Sinn Féin MEP called for Lord Saville’s inquiry report (due to be published this Autumn) to be given to the families at the same time as the British Government receives it.
Speaking at William Street on behalf of the Bloody Sunday families, Julieann Campbell, niece of Jackie Duddy, said:
“When the British Government announced this inquiry we were promised that it would be open and transparent. We demand that this applies to the publication of the final report.
“The British Government should not be given the chance to interfere with it before the world sees it.”

COURAGE
Bairbre de Brún acknowledged and commended “the steadfastness, commitment and courage of the Bloody Sunday families and of those wounded that terrible day, 37 years ago”.
“Is iomaí constaic a cuireadh romhaibh ar an bhealach ar lorg na fírinne agus sibh ag iarraidh na héagóracha a rinneadh oraibh a chur ina gceart agus chuaigh sibh i ngleic leo le dínit.
“Beag beann ar na constaicí a cuireadh romhaibh – sheas sibh an fód go daingean diongbháilte.
“Throughout those years many people told you – indeed many people honestly believed – that the British Government would never yield to your core demand that there should be an independent inquiry and that the injustice of the Widgery Report be overturned and finally consigned to the waste-bin of history.
“Therefore, when Tony Blair, the then British prime minister, announced a new inquiry under Lord Saville, it seemed that all the years of closed ears, closed doors, hard work, lobbying, and campaigning, had been truly vindicated. But again you were met with obstruction and destruction of evidence by those who fear truth.
“The theme of this weekend’s events and today’s march is ‘Justice Delayed – Justice Denied’. And given that it is now over 11 years since the announcement of the Inquiry and it is almost four years since the inquiry concluded taking evidence – you, the families, have again displayed tremendous patience while awaiting Saville’s findings.”
De Brún said that the overwhelming body of evidence presented to the inquiry “confirms what all of us know – that British paratroopers, under the control of the British Government, murdered 14 unarmed civil rights demonstrators and wounded and traumatised many others on their own streets in this city”.
“The families accept that Saville had a large volume of evidence to consider but let him be mindful of the theme of today’s march – Justice Delayed is Justice Denied. He must ensure that 2009 is the year that his report is published. He must also ensure that his report is delivered to the families at the same time as to the British Secretary of State.
“Go raibh 2009 ina bliain nuair a aithneoidh rialtas na Breataine, a bhfuil a chuid saighdiúirí freagrach as dúnmharú ar ár sráideanna, fírinne Dhomhnach na Fola.”
The original march, she reminded the many young people present, called for an end to internment, civil rights, equal citizenship and justice.
“Today, many people continue in their search for truth and they are entitled to it. Whether it be the Bloody Sunday families, the families of Ballymurphy where 11 people were murdered in a 24-hour period by the Paras in August 1971, or any other families, they are entitled to the truth.”

PALESTINE
As an Irish republican Member of the European Parliament, Bairbre de Brún said it was magnificent to see the march demonstrating support for a durable peace process in Palestine.
The ‘Sea of Flags’ initiative, one thousand flags carried representing over a thousand people killed as a direct result of Israel’s bombardment and occupation of Gaza, was “an impressive demonstration of solidarity with the suffering people of Gaza”, she said, drawing parallels between what happened in the Bogside and what is happening in Gaza:
“Justice delayed, justice denied describes well the current situation in the Middle East.
“Justice demands an end to the blockade of Gaza. Justice demands an immediate opening of its frontiers to allow much-needed humanitarian aid to reach those in need.
“Is ceart agus is cóir go rachaidh gach duine a raibh baint acu leis an choimhlint i mbun caibidlíochta chun bealach chun tosaigh a lorg atá idirbheartaithe.
“As an MEP I was a member of the Monitoring Commission overseeing the elections in the West Bank and Gaza. Those elections were open, fair and inclusive. Those who deny the people of Gaza the right to decide their democratically-elected representatives are delaying a just and durable peace. Let us all continue in our efforts to ensure that that day will be realised soon.
“Mar athrú ar na blianta a chuaigh romhainn tháinig an mórshiúl inniu chuig an áit ar cuireadh stop leis seacht mbliana is tríocha ó shin. Ar an bhliain seo chugainn cinntímis go rachaidh sé ar aghaidh chuig an cheann scríbe a bhí beartaithe don chéad mhórshiúl - Cearnóg an Ghildhalla.
“The pursuit of truth continues.”

• FLOWERS FOR THE FALLEN: Family wreaths are laid at the monument on Rossville Street before the start of the Bloody Sunday march

• ON THE MARCH: The Bloody Sunday 2009 commemoration march