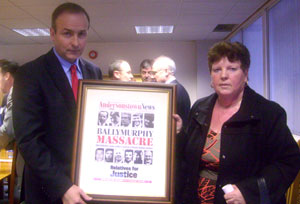 MEETING: Alice Harper, daughter of Danny Teggart, one of those killed by the British army in Ballymurphy in 1971, with Minister Micheál Martin

SINN FÉIN West Belfast MP and President Gerry Adams along with MLAs Jennifer McCann and Francie Molloy MLA have met with the Minister for Foreign Affairs Micheál Martin.
In the course of two separate meetings in Belfast on Thursday, 29 January Martin was introduced to the family of Damien Walsh a 17-year-youth killed by the UDA in March 1993 and then the families of 11 people from the Ballymurphy area who were killed by the British Parachute regiment in August 1971.
Representatives of Relatives for Justice were also present.
The meetings were requested by Sinn Féin to provide the families with an opportunity to ask the Irish Government for its support for independent investigations into the full circumstances of these deaths and for an acknowledgement from the British government of the innocence of all those killed and of the injustice suffered by the families.
Speaking after the meeting Gerry Adams said the families made a compelling appeal for assistance and support. He said:
“Damien Walsh was killed by the UDA. There is no doubt that collusion took place involving the RUC and British Army.
“Currently the Ombudsman’s office and the HET are each carrying out investigations into this case.
“In the three days following the introduction of internment in August 1971 11 people were killed by the British Army’s Parachute Regiment in the Ballymurphy area. The British Army’s action was part of a deliberate tactical decision intended to intimidate the Ballymurphy and nationalist community.
“What all of these families and many others want is the truth.
“They want the cover-ups and obstructions by the British government and its agencies to end.
“I want to commend the families for their extraordinary courage and determination.
“We asked Minister Martin to commit the Irish Government to assist these families in their efforts to secure independent international investigations into these deaths; and to have the British Government acknowledge the truth surrounding the shooting dead of their loved ones.”
An Phoblacht
44 Parnell Sq.
Dublin 1
Ireland