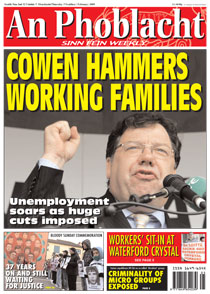 As unemployment rose to an unprecedented level of 327,861 Fianna Fáil Taoiseach Brian Cowen announced a Government package on Wednesday that targeted public service workers but did nothing for job creation. An average of 1,000 workers per day lost their jobs in January 2009.
Cowen’s pension levy will hit lower paid public servants hard with, workers on €35,000 losing €2,250 per annum. The Early Childcare Supplement has been cut from €92 to €83 per month and restricted to children under five.
In the Dáil Sinn Féin’s Caoimhghín Ó Caoláin said the Government was doing this “in extraordinary circumstances” with the breakdown of the talks with trade unions in the early hours of Wednesday, raising major questions about the intent of the Government in those negotiations and their competence as negotiators.
He asked why the detail of the public service pension levy was only tabled at the last minute and whether the Government was playing a game of brinkmanship or was it simply employing ham-fisted negotiation tactics.
The result, he said was an even greater mess that undermined confidence in the economy.
“The Taoiseach’s decision to start discussions on the pension levy at the eleventh hour would seem to indicate that he was never fully committed to getting across-the-board agreement from the unions and the employers”, Ó Caoláin said. He said in contrast to the unions, employers group IBEC was pleased with the result – an ominous sign for ordinary workers.
Sinn Féin agreed with the trade union movement that low to middle income earners cannot carry the substantial burden for measures to tackle the economic crisis.
“Proposing a pension levy for those on the lowest public service incomes whilst the CEO of the ESB continues to earn an annual salary of €534,998 and senior bank executives who have undermined the country’s banking system and exposed Irish taxpayers to astronomical liabilities keep their jobs and a massive income is simply outrageous.
“The Taoiseach has told us of ‘immediate legislation’ to put this new levy in place. Where is the immediate legislation to bring the swindling bank bosses to book? Where is the immediate legislation to give relief to mortgage holders facing untenable debt and the repossession of their homes?”, Sinn Féin’s Dáil leader said.
He said the primary goal of a recovery plan must be to safeguard livelihoods of low and middle income workers and deliver a job creation strategy. Sinn Féin in its pre-Budget submission found almost €2 billion in saving for the exchequer yet the Government was flailing in the dark.
Ó Caoláin pointed out that it was Brian Cowen who was Finance Minister when private housing construction rose at an untenable rate and reckless bank lending practices took place.
“It is now the Taoiseach who is responsible for the last six months which has seen the Government make one u-turn after another in their response to this economic crisis”, he said.
While money is cut from workers’ incomes, the Government continued to pour billions into the banks with almost no strings attached. The nationalisation of Anglo-Irish was simply a bail out of property developers and left the tax payer picking up the bill for toxic debts.
The Cavan/Monaghan TD said a key source of wastage of public spending was in the private companies operating on the back of public services.

MASSIVE JOB LOSSES
Ó Caoláin went on:
“In the past four weeks we’ve seen Dell announce 1,900 job losses with a further related 4,000 jobs to go. 400 workers have been made redundant in Dundalk and only last Monday it was announced that 750 workers in Ulster Bank will join the growing queues at our social welfare offices.
“We have a crisis with Waterford Crystal that the Government has done almost nothing about and our SMEs are still being strangled by the credit drought due to the Government’s failure to put pressure on the banks.
“There is still a crisis developing with our mortgages and despite calls from economists and examples of a number of other countries launching initiatives to help struggling mortgage holders, the Government has yet to come up with a single concrete proposal.
“We are willing to provide the Government with ideas to tackle the deficit in our finances if the Government is willing to listen.
“But it is not simply a question of balancing the books, it’s also about producing proposals to get the economy moving again and thereby raising additional revenue. There is a need for a job creation strategy and there is a need for the state to now take a real role in our telecommunications infrastructure and our gas resources, given the failure of private companies to enhance our economy in those areas.
“The real front line in this economic crisis is not here in the Dáil or in partnership talks. It is in the workplace where workers face cuts in income if they are lucky and redundancy if they are not. I take this opportunity to send solidarity to the workers occupying Waterford Crystal and to support their demand that this flagship Irish industry be saved by direct Government intervention.”