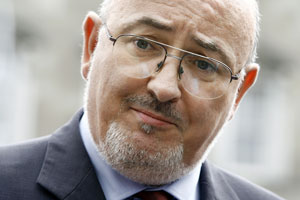 Speaking in the Dáil during Taoiseach’s Questions, Sinn Féin Dáil leader Caoimhghín Ó Caoláin said the current impasse in the Executive in the Six Counties was caused by the refusal of the DUP to agree to the inclusion of key overdue issues on the Executive agenda, including the transfer of policing and justice powers from London to Belfast.
Ó Caoláin asked the Taoiseach Brian Cowen if he accepted that “partnership requires agreement on the part of all the principal parties in order that progress might be made and that in refusing to act in partnership, the DUP is causing the current difficulties?” He assured him that Sinn Féin will continue to work to overcome this impasse and asked “what efforts will the Taoiseach and the Government make to encourage the development of forward momentum on this matter and the acceptance of partnership?”
In reply the Taoiseach said: “I accept that Sinn Féin is committed to partnership. It is important that we get everyone around the table in a working relationship. It is correct that certain issues are long overdue for resolution and that partnership requires agreement. We will do anything we can to assist in that regard.”
Commending the work of the Executive, the Taoiseach also said:
“The Executive has major potential in the context of working well for all the people across a range of issues. We have hit an impasse in respect of this important issue. I do not for a moment suggest this is not an important issue. This is a critical issue and is one in respect of which many steps have been taken. Sinn Féin has shown leadership on this question, and that is to be acknowledged.”