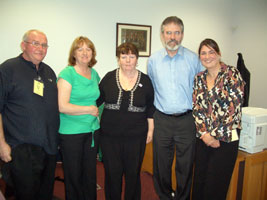 SINN FÉIN West Belfast MP Gerry Adams MLA met families from the Ballymurphy Massacre Committee and Relatives for Justice at Parliament Buildings last Monday.
The meeting was to discuss the campaign of the families for justice and its progress to date.
Following a request to the Irish Government from Gerry Adams, the Ballymurphy Massacre Campaign Group is due to meet with the Minister of Justice Dermot Ahern in Belfast next month.
Speaking after the meeting Gerry Adams commended “all of the families for their determination and courage in continuing to pursue this campaign over many difficult years”.
Adams said:
“The families of the 11 people killed by the British Army’s Parachute Regiment in the Ballymurphy area, in the three days following the introduction of internment in August 1971, deserve an apology from the British government and the truth about the circumstances surrounding the massacre of their loved ones.
All of these families deserve the full support and encouragement of the community, and of the Irish government, in their efforts to secure an independent international investigation in these deaths; and to have the British government acknowledge the truth surrounding the shooting dead of their loved ones.”