How to make a global financial crisis 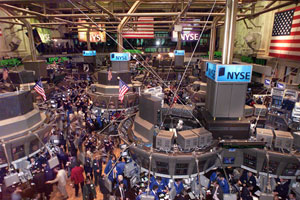 FINANCIAL MARKETS: People have been struggling to decipher jargon to understand what's behind the unfolding crisis

Many people have spent the past couple of months trying to decipher the incomprehensible business jargon filling the newspaper pages so as to understand what’s behind the unfolding crisis in the world’s financial markets.
Most of us who don’t work in the finance industry are wondering what the hell “credit default swaps”, “mortgage-backed securities” and “collateralised debt obligations” are and how did they manage to draw the world economy into a serious crisis that threatens the homes, jobs and savings of ordinary people?
If you’re after some comic relief in the midst of all the gloom, take a look at US right-wing nutter Ann Coulter’s characteristically profound analysis of the cause of the crisis, which she sums up as: “They gave your mortgage to a less qualified minority!” According to Coulter, the global crash has been caused by the “politicalcorrectness” and “affirmative action” of the Clinton administration in providing mortgages to African Americans.
Right ... but on a more serious note, if we look through the haze of jargon at the key policies and practices of the banks and financial institutions over the past few years, they jump out as a recipe for disaster. Here’s how they cooked up an international financial crash:

Step 1. Blow bubbles
After the 1973 recession hit, investment in traditional areas of the economy such as manufacturing became less profitable so investment in financial assets became the new lucrative market. “Financialisation” is the process whereby speculation on the stock market has become an increasingly dominant part of the world’s financial activity and assets.
To keep making profits in a period of stagnation in investment, governments and business have tried to stimulate demand by blowing up speculative ‘bubbles’ in the stock market. But the thing with bubbles is that they inevitably burst when demand bottoms out. When the dot.com bubble burst in the US in 2000, the solution was to quickly blow another bubble. And this time, why not gamble on the most important possession most families will ever have – their homes?

Step 2. Encourage massive debt
In the latest bubble-blowing exercise, millions of people borrowed by taking out second mortgages on their homes. At the start of this year, mortgage debt in the US had doubled from 2000, up to $10.5 trillion.
The value of second mortgages was $1 trillion.
People were encouraged to keep borrowing through low introductory interest rates that could then rise in the future. They were encouraged to believe the values of their homes would keep rising.

Step 3. Throw in some greed
The subprime mortgage crisis is a consequence of providing high-interest loans on a mass scale to households on low incomes that can’t get normal mortgages. And despite Ann Coulter’s belief that people on low incomes were granted mortgages out of the politically correct, liberal goodness of the bankers’ hearts, the mortgages were lent on the premise that the lender would make a profit from the high interest rates – and if the borrower defaulted, well that was okay, the home could be repossessed and then re-sold at a profit.

Step 4. Gamble on the debt
The vast number of loans households had taken out, were then sold to Wall Street banks, which packaged them into bonds – “mortgage-backed securities” – that other banks and investors could trade on. The owners of these bonds expected to get a steady return on them as home owners made their mortgage payments.
A new market was created where investors could trade in investment vehicles based on the value of mortgage-backed securities, called collateral debt obligations. The unregulated market for ‘credit-default swaps’, which are a form of insuring against credit default for bondholders, swelled to an unbelievable $62 trillion before the bubble burst – more than four times the annual US GDP.

Step 5. Get rid of the rules
As speculation has become a bigger part of the global economy, there has been a concerted and successful drive to free it from the old rules and regulations imposed after the Great Depression. This drive was led by Ronald Reagan and Margaret Thatcher in the 1980s and was aimed at expanding speculative, profit-making opportunities.
Deregulation included the repeal of legislation aimed at protecting people’s savings being gambled away by their banks. In 1999 the commercial and savings banks were allowed to rejoin the ranks of the investors and banks were able to finance risky investments as long as they set up their own ‘affiliated’ investment bodies – such as ‘hedge funds’.
This has led to the rise of a shadow banking system which has grown to more than $10 trillion since 1999, making it as big as the traditional banking system. But it’s been completely beyond the reach of regulation or public scrutiny. It has also lacked the federal protection and access to short-term borrowing as the traditional banking sector, meaning that when the mass mortgage defaults hit, the shadow banking system began to crash, infecting their associated banks and firms as well.

Step 6. Add more greed
While an investigation was being launched into insurance giant AIG’s cooking the books to make sure their executives’ pay and bonus package wasn’t affected by their actual performance – and less than a week after the US government bailed the company out with $85 billion – the company brought its executives off to a beach resort in California for a week where they spent almost half a million dollars on rooms, food and the spa.
Meanwhile over the past year 1.3 million households have faced foreclosures in the US as a result of being unable to meet their mortgage repayments.

Final step. Have a sudden change of heart about the free market
Right-wing French President Nicolas Sarkozy said at the end of September: “The idea that markets were always right was mad.” Sorry? I thought only terrorists said things like that. And Venezuelan President Hugo Chavez joked, “I nationalise strategic companies and get criticised, but when Bush does it, it’s okay.”
But the enormously expensive government interventions have so far failed to stem the collapse of the markets in the US and fears of a massive recession, complete with spiralling unemployment, poverty and home repossessions, are growing. This is because the key to the interventions has been to inject cash into the financial system, hoping the banks credit freeze will thaw.
Instead of simply nationalising the banks and financial institutions and placing them under public control, the US Government is spending billions buying up worthless assets. And the regulations necessary to prevent a repeat of the disaster have not been forthcoming because their goal is to get cash flowing in the markets as quickly as possible, which things like legislation and, God forbid, public scrutiny of trading, might impair.
So while Bush and Sarkozy and the others committed to the system that caused this crisis are now suddenly okay with state intervention in the economy, the kind of intervention they advocate is aimed at restoring the market to the point where it can begin its destructive cycle anew.
What we need is an intervention aimed at ensuring the homes and savings of ordinary people are secured, stabilising the market to avoid rising unemployment and poverty, and wresting the financial sector from the people and practices that have run it into the ground.