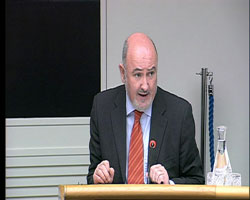 SPEAKING at the Oireachtas Committee on the Implementation of the Good Friday Agreement during which the Victims Commission made a presentation, Sinn Féin Dáil leader and Peace Process spokesperson Caoimhghín Ó Caoláin TD called for the establishment of an Independent International Truth Commission.
The meeting was attended by Sinn Féin Executive ministers Michelle Gildernew and Conor Murphy, MPs for Fermanagh/South Tyrone and Newry/Armagh, as well as Sinn Féin Vice-President Pat Doherty, MP for West Tyrone.
Deputy Ó Caoláin welcomed the work of the Victims Commission for the thousands of people who have been deeply affected by the conflict. “That work is a key part of the process of healing, reconciliation and building a renewed society.”
He told the meeting:
“When it was announced earlier this year that a four-person Victims Commission was to be established, Sinn Féin said that it represented an important step forward in ensuring that ALL victims can be represented equally.
“The different needs, backgrounds and experiences of the many people who have lost loved ones and suffered during the conflict need to be dealt with on an equitable basis. It is positive that we now have in place a commission that puts the needs of victims centre-stage and that, through a collective approach, can ensure parity of esteem for all victims.”

NO HIERARCHY OF VICTIMS
The Sinn Féin Dáil leader said there should never be a hierarchy of victims.
“That is crucially important. People on all sides suffered, as did many who were totally uninvolved in the political or military conflict.
“Following a process of consultation and discussion, particularly with victims and victims’ groups, Sinn Féin has concluded that the best way forward on the issue of truth recovery is through the establishment of an Independent International Truth Commission.
“Republicans have acknowledged the hurt they have caused during the conflict. Sinn Féin President Gerry Adams has expressed his personal and sincere regret and apologised for that hurt. The IRA has also apologised to all those non-combatants it killed or injured and their families.
“In the past, the British state has refused to acknowledge its role in the conflict, the killings by its army and police and especially with regard to collusion. This refusal continues, as we have seen with the failure to co-operate with the Barron investigation established by this Oireachtas. That approach must change.”