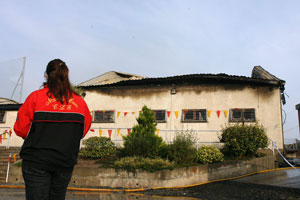 DESTRUCTION: St John's Clubhouse (above and below) was destroyed in an arson attack

THE arson attack on St John’s GAC near Castlewellan in County Down at the weekend came at the end of a two-week period which saw unionist thugs target GAA fans, particularly Tyrone fans sporting their county colours over the weekend of the All-Ireland final.
St John’s clubhouse on the Drumnaquoile Road  was gutted in the fire which was set in the early hours of Friday morning, 26 September.
The fire is a devastating blow to the club and it is estimated that damage up to £100,000 was caused in the blaze.
The arson attack is only the latest in a series of sectarian incidents involving GAA followers.
The hostility shown towards Tyrone supporters in the build-up to the All-Ireland final on 21 September saw a car containing a man, his wife and children being attacked in Gaol Square in Armagh City.
The incident occurred on Saturday night, 20 September, as the family made its way to Dublin for the match. They were stopped at the traffic lights when a number of youths approached their car and ripped Tyrone flags off it.
A number of men then got off a nearby bus and struck the car driver about the head before attacking the car and terrorising the man’s family.
Sinn Féin’s Cathal Boylan criticised the PSNI who refused to act when the man reported the incident at Armagh Barracks.
Boylan also pointed out:
“Supporters’ vehicles had been attacked after the semi-final and the ongoing sectarian attacks clearly demonstrates the unwillingness of the PSNI in Armagh to deal with this problem.”

COOKSTOWN
It was similar picture in Cookstown, County Tyrone, in the run-up to and in the aftermath of the final.
According to Sinn Féin Cookstown Councillor John McNamee, loyalists carried out attacks on homes displaying Tyrone colours, on vehicles carrying Tyrone flags, and there was intimidation of Tyrone supporters in Cookstown’s Main Street.
“There where also incidents involving the PSNI which included cars being diverted around the town because loyalists had caused an obstruction in the Oldtown area.  Public bars were asked to close their doors in the middle of the day and members of the public were being told to remove items of clothing which displayed the Tyrone badge.
“While we acknowledge that these incidents were caused by a small number of people intent on causing trouble, Sinn Féin will be demanding answers about the way that the relevant authorities dealt with the situation.”

DEVASTATION
Speaking to An Phoblacht over the weekend about the attack on St John’s GAC, Sinn Féin Assembly member for South Down Willie Clarke focused on the devastation felt by members of the club.
“Members of the club and community, many of them young people, are devastated by the loss of their local club.
“I want to make the point that this attack has come on the back of recent comments made by senior figures within the DUP against the Gaelic Athletic Association. Those ill-conceived comments are clearly creating a hostile attitude from within Unionism towards the GAA.”
Clarke’s view – that senior members of the DUP have made intemperate comments about the GAA which fuels hostility towards the organisation – was expanded on by west Tyrone Sinn Féin MLA Barry McElduff.
McElduff was reacting to “churlish” comments made by Sports Minister Gregory Campbell on the day after Tyrone’s famous victory over Kerry. Campbell refused to publicly congratulate the Tyrone football team.
To add insult to injury, Campbell then described the Tyrone win as “an international victory” over a team from the Republic of Ireland.
Barry McElduff said:
“As Minister for Sport, Gregory Campbell could at the very least acknowledge and commend the Tyrone footballers for their victory directly as opposed to dancing around the issue.
“Gaels are becoming increasingly disillusioned with a minister more focused on petty remarks regarding the All-Ireland final and someone more focused on Glasgow Rangers than the local All-Ireland winners.”